10 Of The World’s Creepiest Underground Caves

admin
Here are10 of the world’s creepiest underground caves.

While bats and bugs are among the most common denizens of deep, dark caves, supernatural and other particularly chill-inducing inhabitants are said to be occupying a few of them as well.

Here are 10 of the world’s creepiest underground caves.
Number 10. Mammoth Cave. America’s national parks aren’t all about hiking and camping, some offer ghost hunting as well. Among the many spirits said to be roaming about is that of Floyd Collins, an explorer whose leg got pinned by a rock. He perished underground while waiting for help.
Number 9. The Killing Caves of Phnom Sampeau. Though great efforts to beautify this locale have been made over the years, the horrors of the genocide that occurred here are still evident. The bones of those killed at the hands of the Khmer Rouge remain in the cave, which served as a repository for the bodies of the slain.
Number 8. Catawba Murder Hole Cave.  It is a long drop to the bottom of this underground chamber in Virginia, and its opening is very large. Over the years, many have seen it as an opportunity for adventure, but it is rumored one man used it to get away with murder. He lured his victim to the cave, stole his belongings, then sent him over the edge to his death.
Number 7. Bell Witch Cave. As far as unsettled spirits go, Kate, who occupies this subterranean Tennessee spot, is an especially nasty one. Though she started by terrorizing and even killing people above ground, one popular theory is that she now hangs out mostly below it. Some, however, believe the cave merely serves as a passageway between her netherworld home and the realm of the living.
Number 6. Kabayan Mummy Burial Caves. In the days before both the Spanish and Christianity spread through the Philippines' island of  Luzon, mummification was a common practice among some groups. The preserved bodies were stored in remote caverns, and many remain there to this day.
Number 5.  Krubera Cave. The dark, cold and wet lower reaches of this more than 7,000-foot Abkhazian tunnel are seldom explored. In the 4 weeks it took one research team to get relatively close to its bottom, they found themselves immersed in deep pools of murky, freezing water, and surrounded by creepy things that defied identification.
Number 4. Gomantong Caves. Geologically speaking, the Borneo cavern’s most immediately notable feature is its 300-foot tall opening. Beyond that, it is best known for the mountains of bat feces and the incredibly high number of cockroaches, centipedes and scorpions amongst them.
Number 3. Ellison’s Cave. Don’t be fooled by its astonishingly beautiful appearance. The pit of this Georgia cave is the deepest known in the US, extending roughly 600 feet below ground level. Attempting to reach its lowest point has been the final act of many explorers and adventurers.
Number 2. Hodge Close Quarry. When viewed from a particular angle, the cave's reflection above the British quarry’s frigid  lake resembles a skull. Despite the natural warning sign, many have entered the water. Some never returned. In 2005, a diver reported that he nearly became one of the lost when he, startled by what appeared to be a human body, came up to the surface too quickly.
Number 1. Hellfire Caves. In the mid 1700s, these chalk caves were significantly upgraded by England’s Sir Francis Dashwood, the founder of the Hell Fire club. The membership was comprised largely of aristocrats, but what they did at meetings is not clear. It is rumored they gathered for the purpose of casting spells and partaking in other pagan rituals.
Which cave do you think is the creepiest?

10 Of The World’s Creepiest Underground Caves 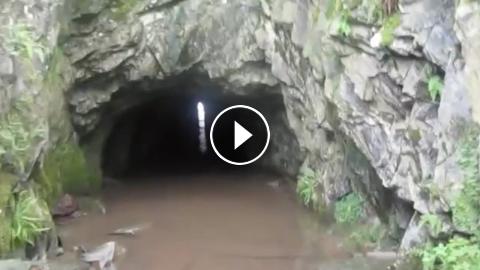 Here are10 of the world’s creepiest underground caves. While bats and bugs are among the most common denizens of deep, dark caves, supernatural and ot...