10 Of The World’s Hottest Foods

admin
Here are 10 of the world’s hottest foods.

If you’re among those who can down hot sauce like water and think jalapeño peppers are refreshing, then these dishes and foodstuffs may be right up your alley.
Here are 10 of the world’s hottest foods.
Number 10. Shrimp Cocktail at St. Elmo Steak House. After completing her worldwide search for the hottest food out there, blogger Alison Stein awarded this Indianapolis restaurant dish the top honor. Surprisingly, it doesn’t contain a single pepper.Its searing heat levels come from generous amounts of horseradish.
Number 9. ‘Not for bunnies’ Vindaloo egg. This chocolate confection is dosed with enough ghost chilies, habanero peppers and scotch bonnets to literally make it too hot to handle. Diners at the UK establishment that makes them must wear protective gloves when touching one. The signing of disclaimers is also involved.
Number 8. Pork Vindaloo. In general, the traditional dish from Goa is intended for those skilled in the consumption of seriously hot food. Among its key ingredients are spicy red peppers, and enough of them to make grown humans cry.
Number 7. Phaal, as made by New York’s Brick Lane Curry House. The Indian stew is typically a scorcher, but this restaurant ups the ante by throwing in some Bhut Jolokia chili. It’s the same ingredient that’s used in tear gas. Known side effects of the menu offering include sweating, vomiting, and hallucinations.
Number 6. Triple X Wings from Jake Melnick’s Corner Tap. The Chicago eatery likes to be memorable, and what’s easier to recall that eating something than burns like pepper spray. Those that make it through an order get their picture posted on the restaurant’s online ‘Wall of Flame.’

Number 5. ‘The Widower’ curry, a specialty at British restaurant, Bindi. 6 million. That’s the rating the dish has on the Scoville Scale, the official measure for hotness. For perspective, Original Tabasco comes in between 25 hundred and 5 thousand. The first man to finish a helping took an hour to do so, in part because had to pause to deal with the strange visions he was having.
Number 4. Naga Viper Chilies. Ranked as one of the hottest in the world, these spicy peppers have enough power to strip paint. Believe it or not, they’re grown in the UK and were custom bred by a British farmer.
Number 3. Carolina Reaper Pepper. In 2013, these were inducted into Guinness World Records as the world’s hottest. A person who consumed three of them reported that the recovery time is about 14 hours.
Number 2. Little Italy Pizza Company’s Death by Pizza. A slice is hot enough to make a person’s tongue bleed. That’s not an exaggeration - it’s what actually happened to one consumer. They’re lucky that’s all that occurred, as the Trinidad moruga scorpion chilies that make its sauce have been known to cause heart attacks.
Number 1. Pure capsaicin. The stuff that makes peppers hot is available in crystalized form. Its Scoville Scale rating is 16 million, making it the hottest item on the list. Those handling it are encouraged to don protective eyewear, a facemask, and gloves.
Would you try any of these super-hot foods?

10 Of The World’s Hottest Foods 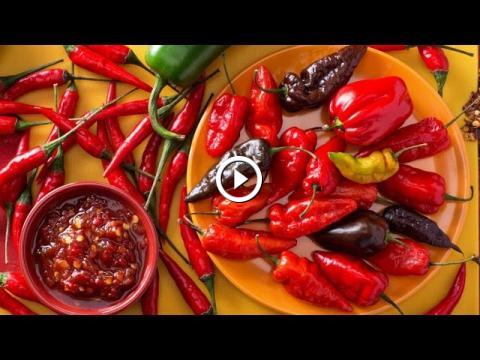 Here are 10 of the world’s hottest foods. If you’re among those who can down hot sauce like water and think jalapeño peppers are refreshing, then thes...