10 Of The World’s Most Stunning Religious Buildings

admin
Here are 10 of the most stunning religious buildings in the world.

People often go all out when it comes to religious buildings by incorporating the grandest architectural styles and paying utmost attention to detail.
Here are 10 of the most stunning sacred structures in the world.
Number 10. Tiger’s Nest Monastery, Bhutan. The Buddhist temple complex is built on the side of a cliff, providing breathtaking views of the verdant valleys and mountains surrounding it. The building itself is a sight to behold as well, from its main courtyard all the way up to its shimmering gold roofs.
Number 9. The Golden Temple Armristar, India.  Erected as a central place for the observance and study of the Sikh faith but is open to everyone, the temple incorporates a variety of cultural aesthetics including Hindu, Muslim, and European influences.
Number 8. St. Basil’s Cathedral, Moscow. The vibrant and heavily patterned church was completed in 1560, but at that time was only white with gold domes. It was given the colorful makeover we see today about 300 years later during rebuilding work.
Number 7. Sheikh Zayed Grand Mosque, Abu Dhabi. Superlatives dominate this locale. Not only is it among the biggest mosques in the world, it is home to one the globe’s largest chandeliers and the planet’s most sizeable hand-knotted carpet.
Number 6. Church of the Transfiguration, Kizhi Island, Russia. Considered a masterwork of wooden architecture, the entire dwelling, standing more than 121-foot high, was constructed without the use of even a single nail. It’s also rumored that the only tool its builder employed was an axe.
Number 5. Sri Ranganathaswamy Temple, India. The space inside the complex’s walls measures approximately 600 acres, making it the largest building of its kind in India. The grounds are arranged like a small town and include many elaborately carved and brightly painted structures.
Number 4. Great Mosque of Djenné, Mali. This UNESCO World Heritage Site is made of mud brick and supported by palm branches. Constructed over a century ago, it is quite vulnerable to the elements, and must undergo significant repairs regularly.
Number 3. Borgund Stave Church, Norway. Established in the mid 12th century, the building incorporates over 2 thousand pieces of wood. Much of the timber was carved to mimic the decorative elements popular on stone structures of the time.
Number 2. Wat Rong Khun Temple, Thailand. Gathering inspiration from popular culture, this massive complex includes imagery of superheroes, cartoon cats, and demons. The architecture, however, maintains traditional Thai aesthetics.
Number 1. Meteora, Greece. The 15th century construction of this group of monasteries was no easy feat, as many materials had to be lugged up 1200 feet of rocky terrain. The interior walls and ceilings are decorated with many frescoes that mark a pivotal moment in the history of post-Byzantine painting.
Which religious structure to you find most stunning?

10 Of The World’s Most Stunning Religious Buildings 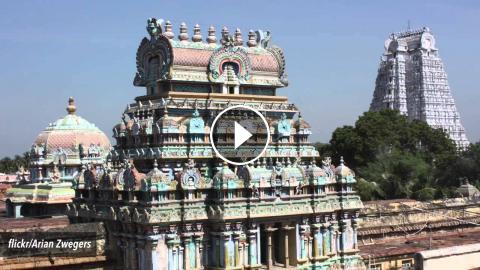