For better or worse, the 2019 Mercedes-Benz A-Class is stereotypical of the iconic German luxury brand. From its gorgeous cabin to its bleeding-edge technology to its comfort and composure, the A-Class is a Mercedes through and through. But there are drawbacks to its Mercedes-ness.

The A-Class suffers from a high price, not to mention a lack of user-friendliness from its new infotainment system. Just as genetics can bless humans with good traits, it can also pass on some less desirable ones. And the same is true of Mercedes' new compact sedan.
Well, it's certainly priced like a Mercedes-Benz. While the base A220 starts at $32,500, our 4Matic-equipped tester adds the entire kit and kaboodle. The result of options like the upgraded MBUX infotainment system, active safety gear, 64-color ambient lighting system, and, of course, racy looks of the AMG styling pack is an as-tested price of $50,660. It's a good thing Mercedes isn't charging by the foot because there's not a lot of car for the money.

But what's here is good, and the price isn't so egregious compared to its chief rival, the Audi A3. Driving the four-ringed compact means shelling out the same amount of cash – $32,500. And that's before dipping into the three available trim levels. The A-Class has no trims, just packages, which is easier to interpret and configure. That said, a loaded A3 Prestige with the more powerful 228-horsepower turbocharged four-cylinder and Quattro all-wheel drive undercuts our A220 easily, sneaking in just below $48,000.
The A-Class ditches the swoopy styling pioneered by the CLA-Class for something a bit more mature. It's like Mercedes ditched the Supreme hoodie and Chucks for a well-tailored sports coat and leather loafers from J.Crew. The result is an attractive but anonymous exterior design.

Our tester stands out more than the norm, though, thanks to its optional 19-inch AMG wheels and associated body kit. As we said during our first drive, we're eager to get a look at the $339-per-month-lease cars that will eventually start arriving in dealerships.

That's true of the cabin, as well. Our tester wears optional contrasting leatherette, and while there's an attractive black-and-white scheme or a tasty toffee-and-black shade available, our silver sedan features a garish black-and-red palette inside. Ignore the eye-catching leather, though, and this scaled-down E-Class cabin is a sight to behold, complete with ample real aluminum accents and interesting shapes, like the circular HVAC vent housings and the ball-socket-style vents. It's an extremely pretty interior. In fact, if you're currently driving a CLA and are looking to upgrade, the A-Class's handsome insides are the single best argument we can make for pulling the trigger. 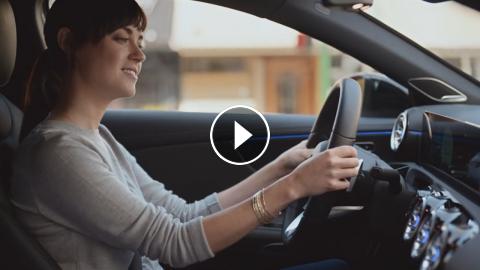