It’s the fourth-generation Mercedes-Benz C-Class, freshly updated for 2018. One in five Mercs sold is a C-Class, and if you lump in the old 190 saloon that went before it, this is a car that’s sold nearly ten million units since 1982.

Not a car you want to mess up then, yet Mercedes describes this as the biggest update the car has ever had; over 6,500 components have changed, which is nearly 50 per cent of the whole car.

If you’re thinking it looks surprisingly like the old car (for one that’s apparently so different), then nearly all of those components are in a brand new electrical architecture – transplanted in from the S-Class, to unlock loads of new safety tech and self-driving potential – and a bunch of new engines.

In the wake of Dieselgate, which Merc’s engines haven’t been untouched by, it’s perhaps the brand-new petrol option that’s most interesting. The C200 is the entry-level C-Class in the UK, and while its name alludes to a 2.0-litre engine, it actually uses a 1.5-litre four-cylinder petrol. It doesn’t work alone, though, and comes allied to some clever (if lightly confusing) mild hybrid tech that contributes to a 182bhp total and 46mpg economy.

Elsewhere, if you tick the right boxes you can have all manner of tech on board, not least some satnav-linked cruise control that paves the way for self-driving Merc saloons of the future. There’s also ‘Energising Comfort’, which combines massage seat functions, climate control and ambient lighting to relax you behind the wheel. One mode sees it imitating a walk along the beach…

The C-Class also boasts some of the most customisable digital dials we’ve yet seen in a car, inherited from the E- and S-Class above it. The whole thing is absurdly customisable, in fact. Mercedes has designed four different trim levels, each with an entirely different bumper design, while the C-Class’s 2018 update has added three new colours and 20 (yes, 20) new designs of alloy wheel.

Add to that a dizzying array of engines, the availability of four-wheel drive and your choice of saloon, estate, coupe and cabriolet body styles, and you have the potential to lose weeks in the Merc dealer trying to figure out which car you want to buy. 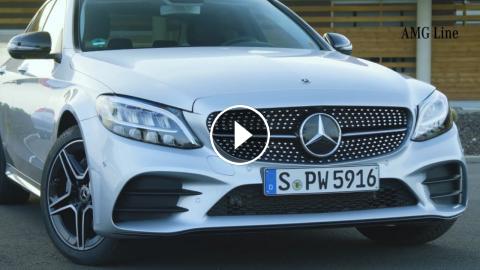