The 2020 Mercedes-Benz GLS represents the third generation of the company’s already iconic SUV. Introduced at the 2019 New York Auto Show, it offers more space, more comfort, and more luxury while retaining a familiar face. The GLS arrives to take on the BMW X7, the company’s first foray in the full-size SUV market, the Lincoln Navigator, and the Cadillac Escalade.

The GLS adopts Mercedes’ latest styling language, seen most recently on the smaller GLE crossover. The exterior has smoother surfaces and sportier fascias, while the interior borrows from the S-Class sedan but features a few unique cues as well. Under the hood, the GLS retains its two-engine lineup with V-6 and V-8 offerings for the U.S. market, but both units are paired to 48-volt mild hybrid systems.
What’s immediately apparent is that the new GLS retains the boxy design of its predecessor. However, Mercedes-Benz aligned the SUV’s design to its new styling language, so the GLS looks like a bloated GLE overall.

Up front, we can see the company’s new radiator grille that now features thicker horizontal slats. It also extends lower into the bumper, and it’s flanked by slimmer, almost rectangular headlamps, just like the GLE’s. The bumper retains the brand’s familiar architecture with an A-shaped apron in the center and large vents on the sides. Both elements are thinner and more aggressive, even on the entry-level version. Two power domes give the engine hood more character, a feature previously available on AMG models only.
The GLS’ profile looks much cleaner now, as Mercedes-Benz ditched the heavily sculpted horizontal character lines of the old model. The panels are smoother but remain muscular just above the beltline and above the side skirt area. Again, this is a trademark feature for all Merc, and we’ve already seen it on the GLE and cars like the E-Class and S-Class.

The roof has the same boxy design toward the rear, but the quarter has a rounder frame and slightly thicker pillar toward the top. The rear haunches are muscular too, but it’s less obvious when compared to the angular shoulder of the outgoing GLS. This gives the SUV a more elegant look, but it doesn’t turn it into an utterly bland design.
Changes are similar around back. The tall taillights were replaced with slimmer units that extend even more into the tailgate. The license plate recess is smaller and features a chrome strip at the top. The tailgate didn’t change much, but the rear window is no longer almost vertical, so the rear end looks sportier than before. The same goes for the bumper, which now has an independent lower section that looks like a diffuser. All told, the GLS no longer looks like a van from behind.

The sleeker design also improves aerodynamics. The SUVs aerodynamic coefficient is down for 0.35 to 0.32, an impressive figure for a full-size hauler. Difficult to achieve on small cars only a few years ago, this coefficient is slowly becoming the norm for larger vehicles, but Mercedes is the first to hit this number with an SUV. 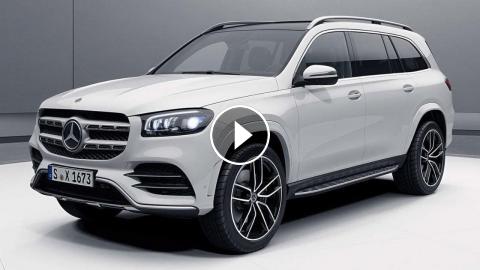