Where's the best place to explore these features? How about the challenging trails in Moab, Utah, and in the high mountains outside of Ouray, Colorado? The TRD models can get through especially challenging spots because they have a lockable rear differential, a configurable traction control system with multiple terrain modes, and a crawl control system. The four-wheel-drive system has low range, and it is easy to tiptoe carefully over rocks because the powertrain's throttle response is precise and delicate in this mode.

We've always admired the Tacoma. But it missed out on our highest ranking because daily-driving factors weren't where they needed to be. The 2020 Toyota Tacoma has been noticeably improved in many areas. It may not be enough to climb into the top spot, but the refreshed Tacoma is now much easier to recommend.

More About the 2020 Toyota Tacoma:

It's a bit early for a full redesign, so it's no surprise that the 2020 Toyota Tacoma is in large part a continuation of the third-generation truck. But it's still worth waiting for. Toyota's engineers have deployed several targeted improvements aimed at making it a better daily driver, and all of them move the needle.

There are extra USB ports, brighter LED headlights (with cool sequential turn signals), a new grille, and thicker side windows to dampen wind noise better. The transmission's shift calibration has been tweaked to reduce gear hunting.

The Tacoma's reputation rests on its off-road prowess, which is more than just marketing hype intended to lure those who like the idea of outdoor adventuring but never quite get around to it. Those types of buyers are certainly among those who are drawn to the Tacoma. And if they could bear to risk scratching their prized possession, they'd discover there's not much it can't do right off the showroom floor — especially the TRD Off-Road and TRD Pro models. But even here Toyota hasn't rested on its laurels. These models can now be equipped with a forward- and side-looking camera system to help the driver spot obstacles that are otherwise hidden from view by the truck itself.

As ever, this truck's very design shows that Toyota is dedicated to making the Tacoma excel off-road on rocky terrain. The basic approach, departure and breakover clearance angles are generous. And the lack of a front airdam on Tacoma TRD Pro and TRD Off-Road models gives them even better approach clearance ahead of their front tires. The lower eyes of the rear shock absorbers are tucked tight against the rear brakes where they're out of harm's way.

We've never been huge fans of the Tacoma's driving position, which suffered from the truck's high floor and the seat's very basic fore-aft and recline adjustability. The new 10-way power driver's seat (standard on every V6-powered Tacoma) changes that dramatically. Tall drivers can drop the seat more than a half-inch lower than before, and shorter ones can raise it about 1.5 inches higher. What's more, it's possible to tilt the seat bottom to optimize thigh support. Though this doesn't sound like much, this seat makes a big difference. Our last wish is for more telescoping steering adjustment.

The other main enhancement for the 2020 Tacoma is the introduction of a new touchscreen audio system. The screen itself is larger and clearer, and we like how the menu shortcuts are now physical buttons instead of indistinct touchpads. Best of all, it now supports Apple CarPlay and Android Auto smartphone integration. Toyota has also designed the touchscreen so that you can mix and match smartphone audio and map sources with the factory built-in ones. In most vehicles, engaging Apple CarPlay or Android Auto locks out any other integrated system.

Toyota hasn't announced pricing or availability yet, but we estimate the Tacoma will cost slightly more than today's model and range from around $26,000 to $36,000. We expect it to go on sale in late fall or early winter.

Make sure to subscribe to Edmunds to get all of the latest videos on car reviews, automotive news, car comparisons, and shopping advice. Subscribe: https://www.youtube.com/user/Edmundsvideo?sub_confirmation=1.

Edmunds will help you find your perfect car with unbiased and useful reviews, advice, pricing, and tools. Visit us at https://www.edmunds.com. 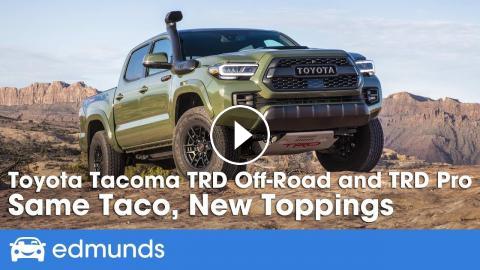 Dan Edmunds, vehicle evaluation director, takes an off-road adventure in the 2020 Toyota Tacoma TRD Pro, which has been updated with creature comforts...