Volkswagen's electric future has already traded on its iconic past with the Microbus-inspired I.D. Buzz concept, and now a new electric concept car has arrived that is reminiscent of Beetle-based dune buggies of yore. Called the I.D. Buggy, this latest concept is less of a production-intent model than other I.D. concepts and more of a fun design study that looks to show the flexibility of the VW Group's Modular Electric Drive (MEB) platform that will underpin a wide range of future electric models.

With a fairly long 104.3-inch wheelbase but a short 160.0-inch overall length, the I.D. Buggy has short overhangs and an impressive 9.4 inches of ground clearance for tearing it up in the sand. Like the Volkswagen Beetle–based Meyers Manxes and other dune buggies, the I.D. Buggy has its power source at the rear, but in this case it's a 201-hp electric motor rather than a flat-four. A fairly large 62.0-kWh battery pack resides under the floor, making for a range estimate of 155 miles in the global WTLP test cycle. It's rear-wheel drive to start, but Volkswagen says the customizable architecture means that a motor could be fitted at the front to give it all-wheel drive.

The packaging is configurable, too, meaning that this two-seat buggy could be set up to add two extra seats. Volkswagen even says that the I.D. Buggy's body could be easily removed from the platform, hypothetically making it something of a kit-car setup like many old dune buggies.

As you'd expect, the I.D. Buggy's styling is far more playful than other VW I.D. concepts, with its green-and-blue paint scheme, funky-looking round headlights and taillights, and the lack of a roof and doors (there is a tarp that can be stretched over the top for sun protection). A set of 18-inch wheels are wrapped in BFGoodrich all-terrain tires, the underbody is reinforced for off-roading, and there are tow hooks in the front and rear bumpers for easy retrieval if the I.D. Buggy should get stuck in the sand. 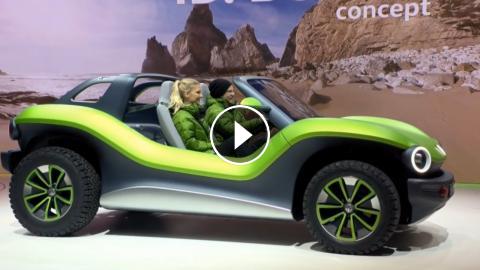