Ava
You might not have heard of the One Plus 6 phone, but it's one of the best and most affordable smartphones on the market. It's extremely fast, has facial recognition, high-speed charging, and plenty of storage.
Tech Insider tells you all you need to know about tech: gadgets, how-to's, gaming, science, digital culture, and more.
Subscribe to our channel and visit us at:
TI on Facebook:
TI on Instagram:
TI on Twitter:
--------------------------------------------------
Following is the transcript of the video:
Antonio Villas-Boas: This is one of the best phones that you've probably haven't heard of and it's called the OnePlus 6. The first thing that makes this phone so great is the price tag. This thing, for $530 is comparable to the Samsung Galaxy S9, even the Apple iPhone X and iPhone 8. It's comparable to the LG G7. It's comparable to all the top phones that you can buy right now.
To begin with, this phone is fast. It is super fast. It's running the Qualcomm Snapdragon 845 processor and you might have heard that name before in the Galaxy S9. So those are the same chips. It comes with 6 gigabytes of RAM. Now this is huge. Most phones come with 4. Your laptop at home or work probably has 8 gigabytes of RAM. That's how much power this thing has inside.
Design, this is a beautiful phone. New to the OnePlus 6 is a glass back. It is also very, very fingerprint hungry. The glass back let OnePlus boost the data speed you can get up to 1 gigabit. One of the cool things that comes with OnePlus phones is the company's Dash charger. The brick holds all the parts that create the heat. It means that your phone could be charging at full speed, no matter what you're doing and it doesn't even get hot.
Let's talk about something that could divide a few people. Especially some people who don't like the notch. So, yeah, the OnePlus 6 has a notch. It's the first model from OnePlus to have a notch. Now of course that makes you think, maybe, of the iPhone X. But on Android phones, what you can do and on the OnePlus 6, I'm gonna turn off the notch. Go into Settings. I go to Display and then I go to Notch display, and I click Hide the notch area. The notch looks like it's gone, right? Except you get the Android notification bar at the top around the edges on the sides of the notch. This is a really good place to put the Android notification bar. This makes it a lot cleaner to look at. You also get a lot more space for your apps, your videos, your content.
So, let's move on to the camera. Yes, dual-lens camera system. We've seen this before on OnePlus phones. I've only taken a few shots with this, the OnePlus 6. It's always been kind of a weak point maybe compared to some other phones and I gotta say, this actually did really well.
Now a few little features that I really like about the OnePlus 6 is it has facial recognition. It works really well and super fast and without fail too. It's not designed for security intensive stuff like Android Pay or Google Pay. It's just meant to get you into the phone fast.
So, one of the reasons why you may not have heard about this phone is you won't find it at your carrier store. Verizon, AT&T, T-Mobile, Sprint, whatever. They don't have this phone. You gotta buy it directly from OnePlus but if you do buy the phone from the website it is super easy to hook up with your carrier. Except for one. Unfortunately, it doesn't work on Verizon.
This phone is super fast. It's super cheap. It looks great. It has a headphone jack. It has one of the best fast chargers in the business. The camera is good. This is a phone that you should all be buying to be honest. If you're conscious about your money you should be buying this phone.
When I talk to the camera, I speak with a slightly elevated volume of voice. And with exaggerated movements. 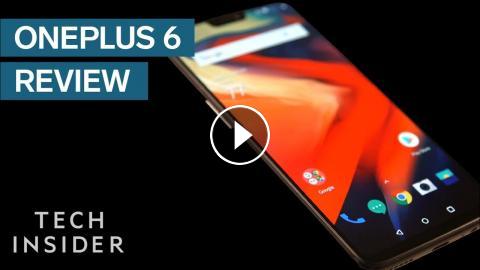 You might not have heard of the One Plus 6 phone, but it's one of the best and most affordable smartphones on the market. It's extremely fast, has fac...