admin
T-shirts provided by RIPT. Learn more about it here:
Stories:
- Entry-level Surface Pro 4 available for $750 ($150 off list) from Microsoft today only
- iPhone 7 expands to 30 new markets, sales so far estimated as weaker than 6s
- A smattering of shady Galaxy S8 specs from Weibo, including a 30-megapixel camera
- Google Home and Chromecast Ultra prices ‘confirmed’ ahead of October 4 launches
- Huawei Nexus 7P could run Andromeda
- Convertible Google Pixel 3 laptop tipped for Q3 2017 launch with Andromeda OS
Watch today's Pocketnow Daily as we talk about the recent deals you can find for the Microsoft Surface Pro 4. Then we discuss the iPhone 7, how it has expanded to more markets, and how it's not wowing in sales. The Samsung Galaxy S8 follows as reports claim that specs might be spectacular. Then Google Home and the Google Chromecast follow as we learn about possible new device launch dates. We end today's show talking about rumors of a new Google OS called Andromeda, which might merge Android and Chrome OS.
All this and more after the break.
Subscribe:
About us:
Pocketnow has been a key source of mobile technology news and reviews since its establishment in 2000. With offices on three continents, Pocketnow offers round-the-clock coverage of the mobile technology landscape, from smartphones to tablets to wearables. We aim to be your number-one source for mobile tech news, reviews, comparisons, and commentary. If you love mobile as much as we do, be sure to subscribe!
Follow us: 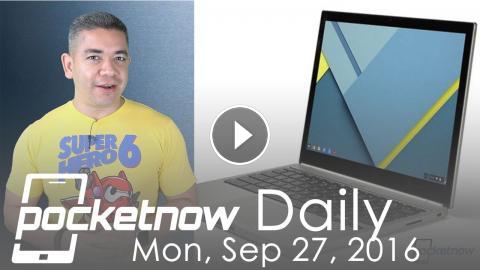 T-shirts provided by RIPT. Learn more about it here: Stories:- Entry-level Surface Pro 4 available for $750 ($150 off list) from Microsoft today only ...