admin
Barring any surprises, the next big smartphone launch of the year will come from Motorola – and right on time, we've got some potential Moto X 2015 leaks to share. Alongside that sits the Galaxy S6 Plus, a (possible) monster of a Samsung handset recently leaked by none other than MKBHD himself. And alongside all this newness we're taking a moment to pour a little out for the oldness, with the sixth anniversary of Palm's landmark launch date, 20090606.
All that, plus the return of What Phone Should I Get and a ton of Stephen Schenckisms to keep your whistle whetted, on Pocketnow Weekly 151. It's scratching at the cupboard door, so unhinge the sucker before it suffocates. Watch the video broadcast from 1:00pm Eastern on June 5 (click here for your local time), or check out the high-quality audio version dropped below. And don't forget to shoot your listener mail to podcast [AT] pocketnow [DOT] com for a shot at getting your question read aloud on the air!
Pocketnow Weekly 151
Recording Date
June 5, 2015
Hosts
Michael Fisher
Stephen Schenck
Producer
Jules Wang
Podcast Rundown

Sponsor
(00:02:00)
Challenge yourself to learn something new with a free 10-day trial to lynda.com! It’s is used by millions of people around the world and has over 3,000 courses on topics like web development, photography, visual design and business, as well as software training like Excel, WordPress, and Photoshop.  All of their courses are taught by experts and new courses are added to the site every week.  Whether you want to invest in a new hobby, ask your boss for a raise, find a new job or improve upon your current job skills in 2015; lynda.com has something for everyone!

News
(00:05:00)
This week in mobile history: 20090606
My switch to T-Mobile, part 3: Barcelona and beyond
Devices
Moto X 2015 leak claims to show device
This is the Samsung Galaxy S6 Plus (?)
Samsung Galaxy S5 to live again as an affordable Neo variant
HTC Announces One ME
New HTC flagship coming in second half of year
Nexus 6 gets some discount action
Developments
Sony improves Xperia Z3+ wet screen usability
Hound emerges as next great contender in voice search
512 GB MicroSD card debuts, for when your phone needs ALL the storage
The SEEK Thermal turns your phone into a tricorder
What Phone Should I Get?
(01:00:00)
A segment about helping you make the biggest decision we're qualified to comment on. In today's installment, we talk to Nancy Hartman about replacing her well-worn BlackBerry, and we counsel Roy about the best choice for an Android-powered Windows Phone placeholder.
Listener Mail
(01:15:00)
E-mailed submissions from Garry Hutabarat, Sam Bove and Vijay V.
•
See you at 1pm ET! 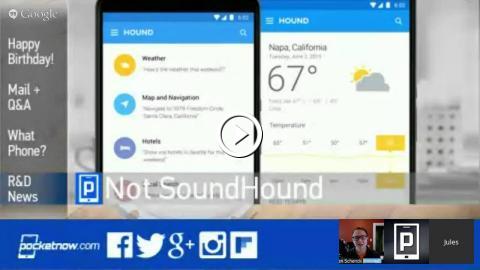 Barring any surprises, the next big smartphone launch of the year will come from Motorola – and right on time, we've got some potential Moto X 2015 le...