The Jesko 300 was briefly mentioned today at Koenigsegg's Jesko debut in Geneva.
Koenigsegg caught the world flat-footed today with the surprise debut of its new hypercar called Jesko. The crazy machine resembles the Agera RS to some degree, but is an evolutionary step forward in performance thanks in part to a revised 5.0-liter twin-turbo V8 making no less than 1,600 horsepower. The car has certainly generated no small about of buzz in the car world, but as incredible as that is, we found a very interesting tidbit buried in the automaker’s launch video at Geneva. An even faster version called the Jesko 300 is already in the works.
The mention comes at the 9:48 mark in the video featured at the top of the page. It’s brief, but it’s extraordinarily significant because company founder Christian von Koenigsegg specifically talks about the car potentially breaking the 300 mph (483 km/h) mark – hence the 300 moniker. We aren’t offered specific details on how that will happen, save for aerodynamic changes that will focus less on downforce and more on outright speed. There’s also no mention of a timetable for when we might see this speed-focused variant.
As it is, we’re already wondering just how fast the Jesko is in its current configuration. Koenigsegg made no mention of performance metrics in its announcement, but all indications point to this car being just as quick as the record-holding Agera RS. The engine has two horsepower levels – 1,600 is achievable on E85 fuel while only 1,280 hp is produced on regular pump gas. The car’s new nine-speed dual-clutch gearbox is dubbed Light Speed Transmission (LST) and is capable of manually shifting through gears sequentially, or directly downshifting between several cogs to find the best gear for maximum acceleration. 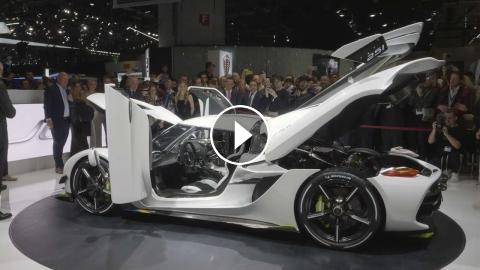