ava
Tails of Iron is out now on Xbox Series X|S and Xbox One: https://bit.ly/BuyTailsOfIronOnXbox

With the tyrannical Greenwart now defeated, King Redgi’s vast lands chime with celebration. But the recently crowned saviour isn’t free to rest easy on his throne just yet. As decreed by an ancient Rat tradition, the new King must prove his worth… in a deadly trial of combat.

Defeat the most lethal warriors from across the land to claim the key to the old King’s room. But what heinous secret lurks within?

Set in a grim land plagued by war, Tails of Iron is a hand-drawn RPG Adventure with punishingly brutal combat. As Redgi, heir to the Rat Throne, you must restore your broken Kingdom by banishing the merciless Frog Clan and their ferocious leader, Greenwart.

As you explore the deceivingly charming world, you’ll encounter a cast of unique companions, ready to aid you in your adventure. And you’ll need all the help you can get, whether that’s new meal recipes, blueprints to forge deadly weapons and armour, or even a land-chugging, armour-plated mole mobile!

Overcome your fears. Rescue your brothers. Restore Your Kingdom.

Your tail has begun…

FEATURES
-----------------
- Master brutal combat, inspired by the souls-like genre, featuring dodge-rolls, parry bashes, and fatal executions!
- Explore a vast and treacherous Kingdom, comprising six distinct biomes, each with its own hidden paths and secrets
- Immerse yourself in a compelling story, narrated by the deep, raspy vocals of the legendary Doug Cockle
- Customize your attack style with a vast array of distinct weapons and armor
- Assemble a band of brave companions, ready to aid you on select missions
- Complete side quests to earn additional gold-on-the-side
- Unearth special blueprints to forge new and powerful weapons
- Collect rare ingredients to cook up health-boosting feasts
- Overcome savage boss fights against the Frog Clan’s deadly, oversized generals
- Lose yourself in the gorgeous and lovingly-crafted 2D hand-drawn art style. 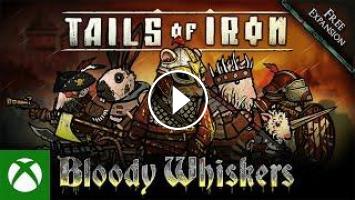