Why Dog Breeds Look So Different But Cats Don’t

Ava
Ever notice how dog breeds look so different from one another?
A Maltese weighs about seven pounds, while the English mastiff can weigh up to 240 pounds. It's not just weight, either. Just look at the difference in shape between the dachshund and the German shepherd. Cats, on the other hand, have way less variation. The Singapura cat weighs about eight pounds, while the largest domesticated cat breed, the Maine coon, only goes up to about 20 pounds. Besides their size, cat breeds pretty much look the same.
Turns out, there are 190 recognized dog breeds in the US and only 42 cat breeds. So why don't cat breeds have the same extremes in size and shape as dogs? I spoke with Carolyn Vella, former member of the Cat Fanciers' Association.
"Dogs were appreciated a lot more than cats were because dogs were useful. They could herd, they could work, they were considered protective animals."
Man's best friend has been around for a really long time. According to skeletal remains found in Russia, domestication of dogs started at least 19,000 years ago. When they weren't cuddled up with their human, they were likely involved in some type of labor. German shepherds were used as shepherds in Germany. It's a lot easier to get Spike to herd your sheep than to do it yourself. Foxhounds were used to ... OK these names are self-explanatory and you get the point. Whether you wanted your property guarded or farmland tended to, there was a dog for that.
Through selective breeding, owners quite literally shaped their dogs according to their needs. So why don't cats have nearly as many breeds?
"Cats are meant to be admired. What you do for a cat is you look at it. They're so beautiful. Cats have been revered for decades in time," Vella said.
So revered even, that in some cases breeding them was looked down upon, and even prohibited.
"The Japanese bobtail was originally a street cat. Then the emperor of Japan fell in love with this street cat. He had it in his palace and he decided that no one but himself could breed this cat. And from that point on, no one but the emperor of Japan could have or own the Japanese bobtail."
Asked whether cat breeds will ever be as varied as dog breeds, Vella said:
"I don't think so. We have an awful lot of people who are against pedigreed animals of all kinds because we have a situation where we have a lot of shelter animals. They are very much opposed to breeding animals because they want the shelters to be empty."
Organizations like PETA are against selective breeding because it can cause health complications. Bulldogs suffer from respiratory issues and overheating and German shepherds can suffer from hip dysplasia, a condition where leg bones don't fit into their sockets. Cats aren't immune to health problems, either. Pedigree cats have a higher risk of getting cancer, kidney disease, or joint problems.
And Carolyn's right about the US having a lot of shelter animals. The ASPCA estimates about 6.5 million animals enter a shelter every year, and 1.5 million end up being put down. So if you're thinking of getting a pet, consider adopting from a shelter.
Read more:
FACEBOOK:
TWITTER:
INSTAGRAM:

Why Dog Breeds Look So Different But Cats Don’t 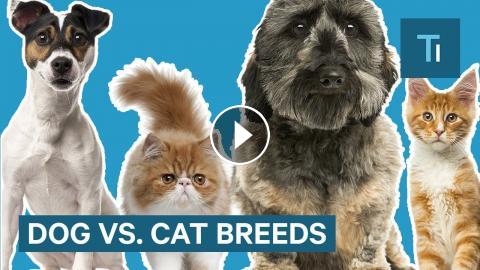 Ever notice how dog breeds look so different from one another?A Maltese weighs about seven pounds, while the English mastiff can weigh up to 240 pound...