admin
Here are 10 of the most expensive yachts in the world.

Yacht ownership in general is considered a sign that one’s life is defined by luxury and deep pockets. Without question, there are some vessels that make that more apparent than others.
Here are 10 of the world’s most expensive yachts.
Number 10. Dilbar, value: 263 million. What does a quarter of a billion dollars buy in the upper echelons of the yacht market? Just about everything you’d expect, including hot tubs, a helicopter landing pad, and lots of room for friends.
Number 9. Pelorus, value: 300 million. This 377-foot beauty is equipped with two helicopter landing areas. For those more interested in water toys than the air variety, there’s a garage overflowing with jet skis.

Number 8. Al Said, value: 300 million. Among the notable things about this yacht, other than its staggering price tag, is that it accommodates about 65 guests with enough room left over for 150 workers to serve them.
Number 7. Dubai, value: 300 million. Designated as one of the largest personal luxury crafts in the world, this boat has plenty of space for all sorts of fabulous things, like 7 decks, a pool, a few Jacuzzis, and a submarine.
Number 6. Radiant, value: 320 million. Just because a yacht owner is out relaxing and cruising the seas, that doesn’t mean his or her enemies are taking the day off too. Defensive gear on this ship includes sonic guns and water cannons.
Number 5. A, value: 323 million. It may be small by super yacht standards, but it’s still offers up price tag-worthy amenities. Further, it was planned out by design superstar Phillippe Starck.
Number 4. Serene, value: 330 million. This one’s both huge and family friendly. In addition to the requisite helicopter pads and swimming pools are several play areas for children. One of them comes complete with a Nemo underwater viewing area.
Number 3. Topaz, value: 520 million. Some days, people just don’t feel like lounging around the pool and soaking in the rays. For just such occasions this floating entertainment extravaganza has a movie theater on board.
Number 2. Azzam, value: 600 million. They say it’s good to be king, but being the president of the United Arab Emirates apparently isn’t bad either. The current leader owns this nearly 600-foot long yacht. It’s both the world’s largest and fastest.
Number 1. Eclipse, value 1 billion. Naturally, this one has pretty much everything the others do and more. Extra, personal touches include the addition of a disco, a hair salon, and a laser system to defend against prying eyes.
Which yacht would you most like to take a spin on? 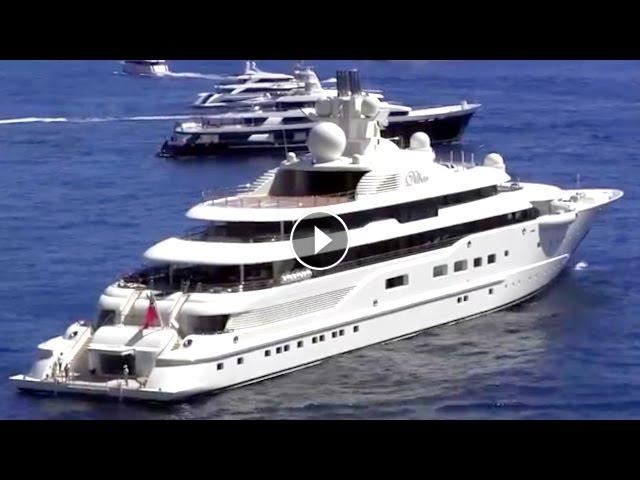 Here are 10 of the most expensive yachts in the world. Yacht ownership in general is considered a sign that one’s life is defined by luxury and deep p...