Humans often lament that life is too short, but compared to some of the creatures on Earth, ours is practically an eternity.
Here are 10 animals with incredibly short spans of existence.
Number 10. Houseflies. Those that actually have the benefit of living in a house survive the longest. The ones left to fend for themselves in the wild tend to not fare as well, and are more vulnerable to expiring earlier. Overall their expectancy range is between 15 and 30 days.
Number 9. Mayflies. They get to take it easy beneath the water for one long, carefree year, but when adulthood comes all of that changes. At that point they have as little as an hour left, and it’s entirely devoted to the successful spawning of the next generation.
Number 8. Worker Bees. Spring is a busy time for them, and all that flying around really takes its toll. Those out and about during that season only live for 5 to 6 weeks. The ones born just ahead of the slower days of winter can endure for over 5 months.

Number 7. Ants. Again, it’s the working class that passes the soonest. While queens can live to enjoy their reigns for upwards of 30 years, her humble servants can perish after only a bit over a month.
Number 6. Nothobranchius furzeri. The fish survives about 3 months, but in that time experiences a full growth and decline process. Those that occupy more humid environments do enjoy a longer stretch, but only by a matter of weeks.
Number 5. Gastrotrich. They live for a week or less, but do enjoy a full range of experiences. The poppy seed sized creatures grow, develop, find a mate, and have babies. Shortly after, their lives end simply because, per nature’s design, it’s time.
Number 4. Mosquito Fish. Throughout their existence they provide an important service, and one particularly of interest to humans – they eat mosquito larvae. Unfortunately, they’re not long for this world. Their life expectancy is only about a year.

Number 3. Brine Shrimp. Perhaps you know them better as Sea Monkeys. Anyone who takes them on as pets should know that they won’t be around for long. Maybe a few months. To make sure they have the best life possible, keep them in salty, room temperature water and feed them their favorites, yeast and green algae.
Number 2. Opossums. Those not in captivity and thus protected from any number of perils and predators only live about a year and a half. The ones that do need to fend off fatal enemies often do so by pretending that they’re already dead.
Number 1. Monarch Butterflies. The orange-winged beauties, for the most part, only grace the planet for between 4 and 6 weeks. Those born latest in the season are the exception, as they can carry on for up to 8 months.

Which animal’s short-lived existence are you most surprised by? 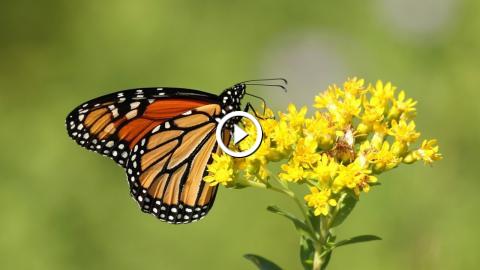 Here are 10 animals with incredibly short life spans.  Humans often lament that life is too short, but compared to some of the creatures on Earth, our...