The ocean is a vast, powerful entity with many unique and mysterious items lying beneath its waves.
Here are ten of the eeriest man-made things found underwater.
Number 10. The Titanic.
Since its sinking in 1912, the RMS Titanic has continued to hold the public's interest, even from the bottom of the ocean. Approximately 1,500 people lost their lives, and their clothing and other worldly belongings remain 12,500 feet underwater.

Number 9. Locomotives.
For more than 160 years two locomotives have sat at the bottom of the Atlantic Ocean off the New Jersey coast. They were discovered when a diver accidentally came upon them in 1985. No record remains of them being built or how they ended up in the ocean.
Number 8. The SS Thistlegorm.
In 1941, the SS Thistlegorm was traveling to deliver ammunition, guns, motorcycles and other supplies to Allied forces in Egypt and Libya. It was bombed by the Germans, and the ship and its cargo have remained in a watery time-capsule ever since.
Nuber 7. Cleopatra's Kingdom.
Queen Cleopatra's former kingdom has spent the last 1,600 years underwater off the coast of Alexandria after succumbing to earthquakes and tsunamis in the 4th and 8th centuries. Artifacts found amongst the ruins range from household items to statues dedicated to other Egyptian rulers.
Number 6. Concrete bodies.
An underwater art installment entitled "The Silent Evolution" was placed near Cancun, Mexico in 2010. It features 400 life-like human statues that will remain permanently on the ocean floor as artificial reefs.
Number 5. Heracleion.
2,300 years ago the city of Heracleion controlled all the trade that made it's way into Egypt. It's a mystery why Heracleion now sits underwater.  Many artifacts of the ancient city have been found, including 64 ships, 700 anchors, 16-foot-tall statues and gold coins.

Number 4. The Ghost Fleet of Chuuk Lagoon.
Numerous Japanese ships and airplanes were destroyed by Allied forces during World War Two in the South Pacific. Their wreckage, along with the skeletal remains of those who manned them, have been underwater in the Chuuk Lagoon since 1944.
Number 3. Air France Flight 447.
While en route from Rio de Janeiro to Paris in June of 2009, Air France Flight 447 crashed into the Atlantic, killing everyone onboard. Most of the plane remains underwater, and while many bodies of the 228 victims have been found, some remain amongst the wreckage.

Number 2. Cuba's Sunken City.
In 2001 a team of researchers reported finding pyramid and circular structures they believed to date back at least 6,000 years off the western coast of Cuba. Known in the media frenzy that followed as Cuba's Sunken City, it was propositioned as an urban center for an ancient civilization that succumbed to flooding waters.  The story died amid questioning and no further investigation appears to have been done since then.

Number 1. Eternal Reefs.
Throughout history, the sea has been the unintentional resting place for many people. Others, thanks to Eternal Reefs, get to choose it by having their cremated remains turned into artificial reefs.
What do you think is the eeriest man-made thing underwater? 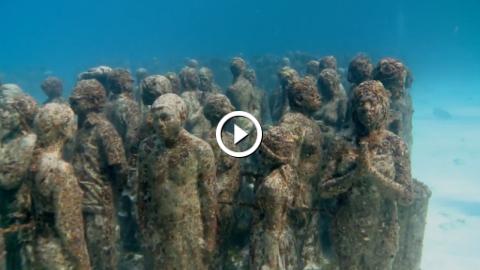 Here are ten of the eeriest man-made things found underwater.  The ocean is a vast, powerful entity with many unique and mysterious items lying beneat...