Combined, the upgrades to Pilot reinforce its capabilities while emphasizing the state-of-the-art technology and family-friendly character that has made it one of the most popular midsize 3-row SUVs. Pilot also remains one of the few models in its segment to offer 8 seats (7-seats with the optional second-row Captain's Chairs), with three-person capacity in both the second and third rows, and with third row access made simple and easy by the available One-Touch Walk-In feature.

EXTERIOR AND INTERIOR DESIGN
The 2019 Honda Pilot's updated exterior reflects its off-road capabilities without losing what makes Pilot a perennial favorite in the midsize SUV segment. The front sports an aggressive new front fascia with standard LED low-beam headlights, while the rear features new taillights, a new bumper, and chrome accents.
The new front bumper incorporates larger fog light housings, fully integrated into the bumper, giving the 2019 Pilot a more aggressive look. A redesigned grille features a bold interpretation of the Honda "flying wing" grille design, with its chrome band extending above the headlights. Further emphasizing the off-road aggressiveness is a new "skid" garnish on the lower portion of the front bumper.

Available fog lights are now LED, the turn signal is thinner, and Pilot Elite models benefit from multi-element full LED headlights, including high beams. Additionally, Pilot Elite models receive power folding mirrors with automatic dimming.
The rear receives new taillights with amber turn signals and LED backup lights. A chrome strip on the rocker extends along the side of the vehicle, wrapping around the rear bumper and highlighting the lower bumper's skid-type design. Wheels are also more ruggedly styled, with 18-inch designs on LX, EX and EX-L, and an aggressive new 20-inch design on Touring and Elite trims.

A hands-free power tailgate is available for the first time on Pilot on Touring and Elite grades. With the remote key fob in their pocket or handbag, the driver simply kicks their foot under a designated area of the rear bumper. The tailgate then opens without the owner needing to use their hands--very useful for occasions when their hands are full.
Full Review http://hondanews.com/honda-automobiles/channels/pilot-press-releases/releases/honda-pilot-arrives-with-a-new-attitude-for-2019-sporting-fresh-styling-new-technology-and-standard-honda-sensing 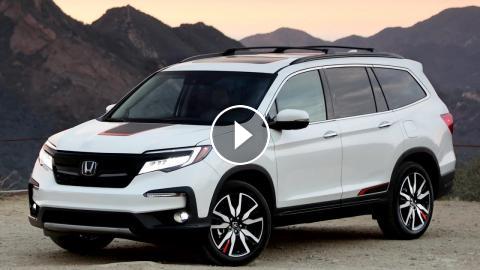