2020 Jaguar XE Introducing: All-New Jaguar XE Sedan Experience https://goo.gl/bamjsE
The 2020 Jaguar XE Ditches the V-6, Gains Sharper Styling and More Touchscreens
When the Jaguar XE was first released in 2014, it was a totally fresh entry in the competitive entry-luxury sports sedan segment. But it didn't hit the U.S. market until late 2016, and it took a while for the XE's engine lineup to get fully fleshed out. Since then, major competitors like the BMW 3-series, Mercedes-Benz C-class, and Volvo S60 have either received complete redesigns or major refreshes, pushing the XE toward the middle of the class. Now, the XE has been given a comprehensive list of enhancements for 2020, bringing the car more in line with the competition in terms of technology and fresh styling.

The XE has always been a sharp-looking car, but fairly subtle styling changes have actually done a lot to improve the look of the XE and keep it looking up to date. LED headlights with a more modern design are now standard, and the LED taillights have been redesigned to align with those of other Jaguar models like the E-Pace. The grille is larger and has a new mesh design, the front bumper has bigger openings and is more angular, and the rear diffuser has been redesigned. R-Dynamic models get different front and rear fascias with an even more aggressive look.
Even bigger changes have been brought to the interior. The XE gets Jaguar Land Rover's latest InControl Touch Pro Duo infotainment system as an option, which augments the standard 10.0-inch upper touchscreen with a smaller 5.5-inch unit between the knobs on the lower dash. The setup is similar to the one found in the electric I-Pace crossover, with the lower screen controlling secondary functions including climate control and vehicle settings. A new steering wheel is brought over from the I-Pace, and the new electronic shifter has been taken from the F-type, as has a new driving-mode toggle switch. Jaguar has redesigned the XE's door panels and armrests, which it says has increased storage space and improved comfort. Higher-quality finishes and new soft-touch materials have been applied to many of the interior surfaces, and leather seating is now standard. 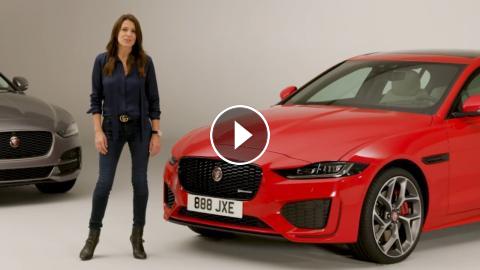