The new Bond film will feature one of the most eagerly-anticipated cars of the decade.
Land Rover has released a short video showing the new Defender in action on the set of the upcoming James Bond film, No Time To Die.
The eagerly-anticipated car's involvement in the picture was first leaked back in August but this is the best look at the machine in action we've had so far.
The footage, shared on social media, shows stunt coordinator Lee Morrison and stunt driver Jess Hawkins putting a film-used Defender through its paces. The cars used in the production were the first to roll off the production line at Jaguar Land Rover's new factory in Slovakia and besides a few visual tweaks, they needed very little modification for their roles on the silver screen.
"It's pretty much standard, as it would be out of the factory," Hawkins, a former Fast & Furious Live stunt driver and current W Series racer said of the film-used Defender. "Everything that we've given it so far, it's taken."

Bond Special Effects and Action Vehicles Supervisor Chris Corbould worked closely with Land Rover's design team to come up with the definitive look for the cars. Based on the Defender X model in Santorini Black, they come complete with with darkened skid pans, 20-inch dark finish wheels, and professional off-road tyres, as well as the addition of the necessary safety equipment needed for stunt work.

The Bond production team put the new Defender through a vigorous regime in 'the most extreme off road conditions' during filming and the car left a lasting impression on Morrison.
"Designing and coordinating the action sequences for the Bond franchise requires a non-compromising mindset," he said. "We needed an unstoppable vehicle to help us battle against the elements, steep descents and river crossings so we chose the new Defender."

"I'm beyond impressed that the Defender is not only back but much, much better!"

No Time To Die will be the sixth consecutive film to feature Jaguar Land Rover vehicles. The long-running partnership began with 2002's Die Another Day when both brands – along with Aston Martin, which will also be back for the sixth-straight film – were owned by Ford.

As well as the new Defender, the Range Rover Sport SVR, Series III Land Rover, and Range Rover Classic will all appear in No Time To Die.

"No Time To Die is a brilliant way to showcase the New Defender’s capabilities in the latest jaw-dropping James Bond car chase," said Richard Agnew, global communications director for Land Rover. "It’s been hugely exciting to continue our relationship with EON Productions and work with their teams to deliver a spectacular sequence."

A fleet of no-fewer than four different Aston Martin models will also appear in No Time To Die. 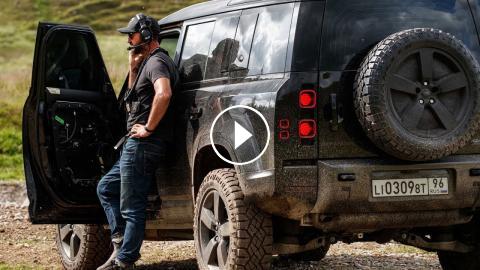 2020 Land Rover Defender - Land Rover Film https://youtu.be/3G1ql6jF8CUThe new Bond film will feature one of the most eagerly-anticipated cars of the ...