Keeping up with the Joneses could be a tough feat if that proverbial family has a 2021 Bentley Bentayga parked in the driveway. This ultraluxury SUV offers all the comfort of a leather-filled parlor plus plenty of tech features, a trio of powerful engine choices, and enough cargo space that you can schlep home a few cases of Montrachet when the wine cellar needs restocking. Supple upholstery, rich wood trims, and real metal accents commingle with modern infotainment touchscreens and wireless connectivity features. The Joneses really know how to treat themselves. Apart from the decadent Rolls-Royce Cullinan, other luxury SUVs have a difficult time stacking up to this Bentley in terms of creature comforts.

Bentley hasn't released pricing for the 2021 Bentayga yet and says the Hybrid and Speed models won't be available until later in the year. That said, we like the V-8 model best. Even though the Speed's powerful W-12 engine puts more pep in this big SUV's step, its price premium over the V-8 is substantial. We'd suggest sticking with the eight-cylinder model and adding some niceties to it, such as the adaptive suspension, the rear-seat entertainment system, and the 20-speaker Naim stereo. And choosing the Touring Specification package will give you a suite of driver-assistance features.

Bentley offers a variety of powertrains for the Bentayga. On the low end, you have a 443-hp hybrid arrangement with a turbocharged 3.0-liter V-6 and an electric motor. Then there's the 542-hp twin-turbo V-8 engine. We haven't driven the former, but we can tell you that the latter emits a hearty burble on its way to 60 mph, which it does in just 3.8 seconds. The Bentayga Speed ups the ante with a 626-hp W-12. Back in 2017, when the Speed made 600 ponies, this supersmooth powerhouse delivered a 3.6-second result in our 60-mph test. The W-12's power delivery is creamier than the V-8's, and its performance felt more robust during passing maneuvers. Bentley claims that the Bentayga Speed, with a claimed top speed of 190 mph, is the fastest SUV in the world (although the Lamborghini Urus might have something to say about that). Regardless of what's under the hood, all Bentaygas utilize an eight-speed automatic transmission and come standard with all-wheel drive.

It should come as no surprise that the Bentayga Hybrid pulls in the best EPA fuel-economy ratings of the range. It also offers up to 18 miles of electric-only driving before the turbocharged V-6 fires up. The V-8-powered model's ratings of 14 mpg city, 23 mpg highway, and 17 mpg combined aren't bad for a large SUV, but the W-12's are. It earns estimates of 12 mpg city, 17 mpg highway, and 14 mpg combined. That said, on our 200-mile highway fuel-economy route, the 12-cylinder Bentayga surprised us with a 23-mpg result.

Interior, Comfort, and Cargo
Filled with rich-smelling leathers, real wood trim, and glitzy metal accents, the Bentayga's cabin stays true to its luxury branding. Bentley allows buyers to customize just about everything. Buyers can opt for front and rear buckets, seating four, or they can select a three-across second-row bench and a pop-up two-seat third row to seat seven. While the rear seat doesn't feel as lavish as that of the Bentayga's key rival—the Rolls-Royce Cullinan—it still offers plenty of space for adult passengers to stretch out. Several different colors of leather upholstery are available, as are two different mother-of-pearl-faced Breitling dash clocks, a bottle cooler for rear-seat passengers, adjustable ambient interior lighting, and even a safe with a biometric lock and fingerprint reader. The Bentayga's cargo area is generous, at least in two-row versions; we were able to fit nine carry-on suitcases back there.
Read More https://www.caranddriver.com/bentley/bentayga 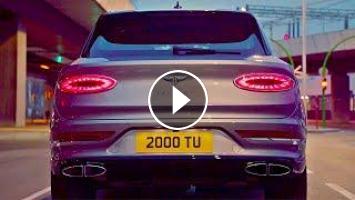 2021 Bentley Bentayga Review, Pricing and Spec Overview Keeping up with the Joneses could be a tough feat if that proverbial family has a 2021 Bentley...