The 2021 S-class sedan ushers in an all-new generation. It attempts to improve on the outgoing model by offering more style, more luxury, more space, and even more technology. We expect the high-performance AMG variants and the ultra-luxurious Maybach model to debut sometime after that. While Mercedes has said that there won't be a next generation of the S-class coupe and convertible (called cabriolet), those 2020 models will carry over into 2021 without any changes.

Mercedes hasn't said how much the new S500 or S580 sedan will cost, and we've learned that there won't be a next-gen coupe or cabriolet, but we expect the six-cylinder version will start at about $96,000 and the V-8 to cost about $10,000 more. If so, those prices are only slightly more than the current models.
Engine, Transmission, and Performance

Mercedes offers the sedan with either a 429-hp turbocharged 3.0-liter inline-six-cylinder engine on the S500 or a 496-hp twin-turbo 4.0-liter V-8 on the S580. Both powertrains are supplemented by a 48-volt hybrid system (called EQ Boost) and pair with a nine-speed automatic transmission and 4Matic all-wheel drive. There will also be a plug-in-hybrid model that's said to have about 60 miles of all-electric range. The S560 coupe and convertible also feature a twin-turbo 4.0-liter V-8, but it's not electrically enhanced and makes 463 horses. Still, the last coupe we tested had smooth, expeditious acceleration that didn't disrupt passenger comfort. It also provided precise feedback from the steering and needed 178 feet to stop from 70 mph. As for the new sedan, we recently rode in a prototype S-class that showcased the sedan's different suspension and steering modes. While every model rides on an air suspension, we sampled the E-Active Body Control, which has a "curve" function" that subtly leans the car into corners. However, Mercedes says this feature won't be available until next year. The S-class can also be equipped with an all-wheel steering system that makes the big-bodied Merc surprisingly easy to maneuver in tight spaces.

Neither Mercedes nor the EPA have announced fuel-economy ratings for the new S-class sedan. Obviously, the government's estimates will vary between the two different powertrains, and we expect the larger of the engines to drink more fuel. Once those official figures are released, and we have the opportunity to put the new S-class sedan through our extensive testing regimen, which includes our 200-mile highway route, we can evaluate its real-world mpg. Otherwise the carry-over S560 coupe and cabriolet should have the same EPA ratings as the previous model year. Both of these body styles are rated at 17 mpg in the city and 26 mpg on the highway. 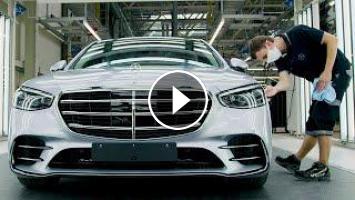 What's New for 2021? The 2021 S-class sedan ushers in an all-new generation. It attempts to improve on the outgoing model by offering more style, more...