2022 Silverado ZR2 Is Chevy's Gnarliest Off-Road Pickup Truck
The ZR2 is ready to rock crawl or hit the trails. Just don't expect it to be Chevy's version of the F-150 Raptor or Ram TRX.
The 2022 Chevy Silverado ZR2 doesn't share a nickname with prehistoric predators. It also doesn't make 700-plus-horsepower like the Hellcat-powered Ram 1500 TRX, and it doesn't offer 37-inch tires like the high-flying Ford F-150 Raptor. Hell, the Chevy doesn't even have 35-inch tires. What the first-ever Silverado ZR2 does have is a 420-hp 6.2-liter V-8, 33-inch Goodyear Wrangler Territory off-road tires, and advanced Multimatic spool-valve dampers. All these goodies make it the bow-tie brand's most formidable off-roader, even if its stat sheet isn't likely to impress anyone who lusts after a Raptor or TRX.
The Silverado ZR2's proportions aren't as visually stimulating as the Raptor or TRX, but it sports a distinctive front end. Unlike its supercharged and twin-turbocharged rivals, the Chevy's small-block engine is naturally aspirated, but its gaping grille—with its hollowed-out bow-tie logo—looks capable of both swallowing large air masses and unsuspecting jaywalkers. Which is to say, the ZR2 looks appropriately aggressive, even if it's not as distinctive as its wide-bodied little brother, the Colorado ZR2.
Above the red tow hooks and the skid plate on the Silverado ZR2's chin is a high-mounted steel front bumper. Not only does it look badass, it also contributes to the truck's 31.8-degree approach angle, which Chevy says is more than you'll get on any other Silverado. That would include those with the Z71 Off-Road package or Trail Boss models with their standard 2.0-inch lifted suspension. The ZR2 sits a half-inch taller than Trail Bosses, and it's only offered with a crew-cab body style and either the short- or standard-length cargo boxes. 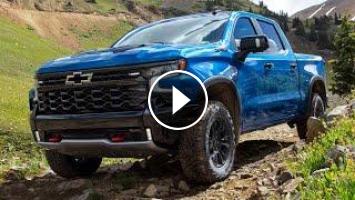