Ava
Following is a transcript of the video.
Humans just tried to contact intelligent aliens. There's a fiery debate in the scientific community. Should we actively try to contact aliens?
Pros: We could make first contact with intelligent aliens.
Cons: We could contact hostile aliens who come and destroy Earth.
Now, a collaboration between musicians and scientists just added fuel to the fire. They sent a radio message to potential aliens on a nearby exoplanet. Is this a good idea? We asked three scientists what they thought.
Brian Greene, Co-founder of the World Science Festival and theoretical physicist at Columbia:
I think we should be all shouting and cheering to the heavens. Let's join the community of cosmic life if there's anything out there.
Jill Tarter, Former Director of the Center for SETI Research:
I think it's probably not the best idea. I think that transmissions should only happen as the result of the consensus, and after there's been a discussion about whether we should. But not only that, if we decide to, then who should speak for Earth and what should they say?
Caleb Scharf, author of "The Zoomable Universe" and Director of the Columbia Astrobiology Center at Columbia:
There is a slightly reckless edge to this because you have to think about, suppose we received a message like this. The message itself may be friendly, full of information, request for communication but it would be incredibly disruptive for us to receive this as a species, as a civilization. The truth is we don't know whether is this very risky. We don't know.
What are the odds of actually making contact?
Jill Tarter: It does no good as they have done to transmit for 33 minutes and not again. Because it means that the receiver is going to have to be looking at you, at us, at exactly the right time in exactly the right way during those 33 minutes when the signal goes on past. To me it seems like this is a strategy with very limited ability to succeed.
Brian Greene: I certainly do agree with Jill — the odds that the alien civilization is listening in at just the right moment when a 33 minute signal wafts by is somewhat unlikely unless they have a dedicated system that's scanning the heavens and looking for signs of life out there.
Caleb Scharf: The odds of a relatively nearby star to us hosting a civilization capable of detecting this message but a civilization that we have not heard from ourselves, it seems like those odds are a bit of a stretch. It's one star out of 200 billion stars in our galaxy. So one does question the odds of that one being a good one.
Are we all going to die from a hostile alien invasion?
Caleb Scharf: Even with reasonable concerns raised by people saying "Well, is it sensible to announce our existence here?" I think the flip side to that would be that to say, any civilization capable of receiving a signal, capable of doing anything about it, of actually deciding to come and eat us all, that level of sophistication — those civilizations would already know that we exist.
Jill Tarter: If they're going to be able to get here then they are, in fact by definition, significantly more technologically advanced than we are on Earth today. They also might have figured out a way to manage their planet and their civilization sustainably for long periods. That seems to me that aggression is not likely to be their main characteristic in that case.
Brian Greene: It's just too unlikely a scenario to concern ourselves with. We need to be bold, we need to be strong, we need to be visionary and those qualities have defined the best of us across millennia and we need to allow those qualities to define the best of us going to the future.
What's the next step?
Jill Tarter: What I'm hoping is that this will cause more discussion. I'd like to hear what the rest of the world has to say.
Read more:
FACEBOOK:
TWITTER:
INSTAGRAM: 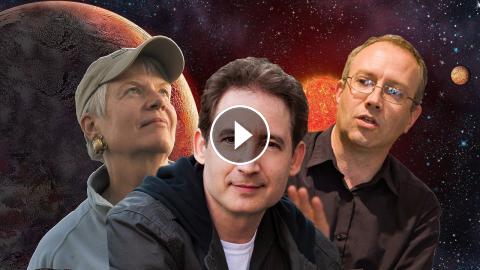 Following is a transcript of the video.Humans just tried to contact intelligent aliens. There's a fiery debate in the scientific community. Should we ...