ava
Animal Crossing: New Horizons has finally arrived on Nintendo Switch. Even if you're a series veteran, New Horizons introduces a lot of new elements to the mix that shake up the usual day-to-day gameplay in some interesting and unexpected ways. Nintendo has shown off some of these in trailers and presentations in the lead up to the game's release, but there are still many others that you may not be familiar with, so we're here to help.

In the video above, we go over nine things in New Horizons that you'll definitely want to know about before settling down on your new deserted island home, from how to get the handy new ladder to how to move buildings and add best friends. We also share some more helpful tips, including a good trick to use when you're trying to catch fish.

If you're looking for more tips to help you settle into your virtual island, we've rounded up lots of guides for New Horizons. Be sure to check out what you should be doing every day, how to get the all-important shovel, and how to make money. We also have an explainer on how to upgrade your inventory space, which you'll definitely want to do to hold more items. 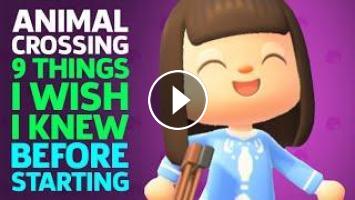 Animal Crossing: New Horizons has finally arrived on Nintendo Switch. Even if you're a series veteran, New Horizons introduces a lot of new elements t...