All The Xbox Series X Games Confirmed So Far

ava
The Xbox Series X is releasing this year and here are the games confirmed so far for Microsoft's console including Halo Infinite, Cyberpunk 2077, and Assassin's Creed Valhalla.

Quite a few games have been announced for the next-generation consoles, Xbox Series X and PlayStation 5--enough to start compiling a list. In the video above, Jordan Ramée details all of the games currently scheduled to release for Xbox Series X.

For the most part, the video lists all of the games in alphabetical order. Without release dates for most of the games coming to next-gen systems, it's a little too difficult to list them out in the order you'll be able to play them.

In total, there are 30 games currently scheduled to release on Xbox Series X. Some are re-releases of games-as-a-service titles, like Rainbow Six Siege and Warframe, while others are brand-new games, such as Assassin's Creed Valhalla and Cyberpunk 2077. It's not all AAA games, either--there are a few indie games already confirmed for Xbox Series X, like Call of the Sea and Chorus.

The video only covers games confirmed to release or launch on Xbox Series X--games like Starfield and The Elder Scrolls VI are left off. Given how far off games like that are, they'll most likely release on next-generation consoles like Xbox Series X, but we don't know that for sure yet.

All The Xbox Series X Games Confirmed So Far 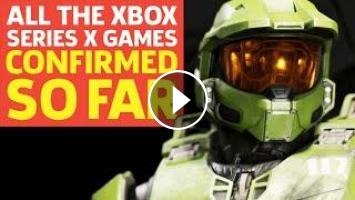 The Xbox Series X is releasing this year and here are the games confirmed so far for Microsoft's console including Halo Infinite, Cyberpunk 2077, and ...