ava
This year marks the 25th anniversary of Pokémon. Throughout the years, Ash Ketchum has held many Ls in the Pokémon League. Join Persia as she takes a look back at some of Ash's biggest losses before perseverance finally prevailed.

The world of Pokemon is vast, and accessible in so many different ways. Whether it's putting yourselves in the shoes of a trainer by battling in the trading card game in the real world; building your own squad of virtual Pokemon through the video games; or watching the adventures unfold in the TV shows, everyone has their own personal Pokemon legend and journey. However, one figure in the world of Pokemon stands head and shoulders above them all: Ash Ketchum.

This is somewhat surprising considering he has more publicly witnessed Ls than perhaps any other trainer in history. Yes, Ash Ketchum is the most well-known Pokemon trainer of all time, but he isn't necessarily the best, which makes the whole "I wanna be, the very best" theme song kinda ironic. Failure has been a constant in Ash's career and, more often than not, his rise to top of the ranks is cut short by another smarter trainer and their more powerful Pokemon. Sorry, Ash, you might be kinda washed.

In this video, to mark the 25th anniversary of Pokemon, we're recounting some of Ash Ketchum's biggest losses. Of course, we're not just dunking on him for fun, there's a lesson to be learned: Trying your best can be as rewarding as winning. Also maybe train your Pokemon better than this loser. 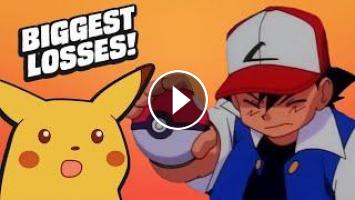 This year marks the 25th anniversary of Pokémon. Throughout the years, Ash Ketchum has held many Ls in the Pokémon League. Join Persia as she takes a ...