What is it?
It’s a very conventional Audi. That’s probably the first thing to note about the e-tron. This is an electric car that doesn’t seek to blur boundaries or act radical, but simply persuade regular SUV buyers to make the jump. Audi refers to this as ‘concept clarity’.

The Tesla Model X deliberately looks and feels different, the Jaguar I-Pace is part SUV, hatch, crossover and coupe, both pitched that way to make an impact and try to pull in buyers from all over. Both need growth. But Audi, defending huge sales volumes, has created a car people will recognise, understand.

Although similarly sized, underneath the e-tron bears little resemblance to a Q7. It isn’t ground-up new, but the MLB Evo platform has been heavily adapted to underpin both this and next year’s e-tron Sportback. There’s an electric motor on each axle, the rear slightly more powerful than the front for a total of 402bhp and 490lb ft, and in between a 700kg, 95kwh battery pack.

The e-tron is built in Brussels, in the plant that used to assemble the A1 (that’s now moved to SEAT’s Martorell facility). Audi won’t talk sales volumes other than to say it’ll be built in similar numbers to the A1. The battery is built in a separate Brussels factory, and bolts direct to the bottom of the chassis.

Further electric platforms are in the pipeline at Audi. The e-tron GT concept shown recently is based on Porsche’s Taycan, while further down the line Audi and Porsche are working jointly on an all-new electric platform, known internally as PPE. That will form the base for the VW Group’s larger cars (possibly including Bentley) while VW’s own MEB platform will feature for its ID models.

Enough industry chat. This e-tron wears another badge: 55 (Audi’s daft designation for cars with 333-408bhp). It’s safe to assume e-trons with varying power outputs will be along shortly, including an entry-level version with a smaller battery. That might lower the range from the claimed 248 miles, but will also help drop the price of entry from £71,490. A fast one is also in the pipeline.

The e-tron seats five (there’s no seven seat option – at this stage at least), and has a large 605-litre boot. Key equipment includes adaptive air suspension, LED headlights, 360 degree cameras, keyless and charging points on both sides of the vehicle while options include a world-first: this production car is available with side cameras instead of mirrors.
Read More https://www.topgear.com/car-reviews/audi/e-tron/driving 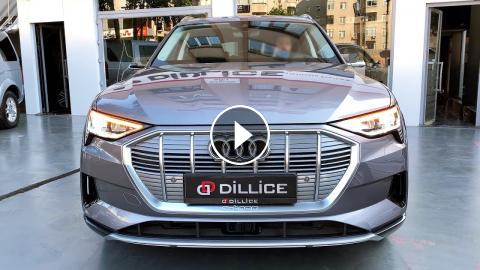