ava
Call Of Duty: Warzone, Infinity Ward’s battle royale shooter, released in March of 2020 and is entering season 5 in August with some unconfirmed map altering events. This year Activision is also expected to publish a Call Of Duty: Black Ops Cold War title which is being developed by Treyarch. It’s unclear at this stage if Cold War’s multiplayer will tie into Warzone directly, but it would make sense for Cold War items to turn up in Warzone.

Ahead of season 5, this video takes a look at eleven changes that could be made to the game right now during season 4. Some of these changes include a better drop system, expanded communication ping wheel, improved armor mechanics, better climbing system, balancing, and major map changes and events. Warzone has teased in-game events most notably when players discovered phones ringing around the map that allowed them to solve a puzzle and enter Bunker 11. Inside they found a blood-covered room where nuclear weapons appeared to have been stolen. The missing warhead later turned up in another bunker on top of a ballistic missile. Fan-favorite Captain Price arrived in season 4 with his re-formed task force 141 to handle the problem. As of yet, nothing else has happened.

Warzone is one of the many cross-progression multiplayer modes in Call Of Duty: Modern warfare. Warzone has also experimented with many limited timed variations including increasing the player count to 200 and a mode where players fight over juggernaut suits. Modern Warfare is currently out for PS4, Xbox One, and PC. Warzone is also available standalone and free-to-play. 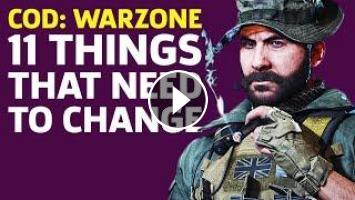 Call Of Duty: Warzone, Infinity Ward’s battle royale shooter, released in March of 2020 and is entering season 5 in August with some unconfirmed map a...