Cyberpunk 2077 Lore | The Bloody Origins of Night City, The Worst Place To Live In America

ava
By the events of Cyberpunk 2077, Night City has experienced decades of history--and not all of it good. In preparation for the release of CD Projekt Red's upcoming first-person RPG, we're going to look back at the events and characters that shaped Night City so you'll be well informed on the world of Cyberpunk when the game releases this November.

There's no better place to begin than the very beginning. In the video above, Jean-Luc Seipke details the origin of Night City, starting with the conception of the corporate-run city by construction company head Richard Night. As you can probably surmise, Night City has a rather bloody history that was defined by corporate deals, assassinations, mob violence, and societal strife.

By the year 2077, Night City had been built upon the foundation of four distinct visual styles, each of which details the different ages of cultural and social-economic growth that occurred in the Cyberpunk universe since 2020. CD Projekt Red is hoping this design creates a "unique take" for the franchise.

"There are layers to the design of Night City and all its inhabitants, so when you drive around and you see a building that's sort of pink with these soft edges, and the windows are sort of soft shaped, you know that this is kitsch style, and you know that was built in that period of time where people had more money back then," Cyberpunk 2077 concept art coordinator Marthe Jonkers said, according to GamesIndustry.Biz. "It's telling you a story about the background of the city, and gives an extra layer of believability."

Images used in this video are sourced from the Cyberpunk Red Jumpstart Kit and Cyberpunk 2020 Night City Soucebook.

Cyberpunk 2077 Lore | The Bloody Origins of Night City, The Worst Place To Live In America 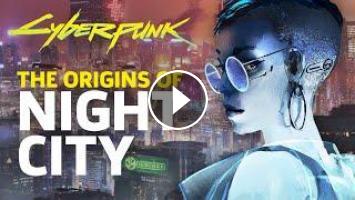 By the events of Cyberpunk 2077, Night City has experienced decades of history--and not all of it good. In preparation for the release of CD Projekt R...