admin
This class will provide an in-depth tour of the new Android build system, which was designed to elegantly deal with the diversity of the Android ecosystem and the demands of modern development practices. We will go through its concepts and features such as variant support and the latest performance improvements. The new build system is also key component to the new Android Studio, and to Continuous Integration. We will show how this makes Android Studio much more powerful than other Android IDEs. We’ll also discuss how the build system can be leveraged to build powerful CI solutions and how to integrate it into larger enterprise build processes. We will give a sneak preview of a new major version of the Gradle Android plugin which comes with another massive boost for performance, variant aware dependency management and an easier yet more powerful configuration model.
Hans Dockter is the founder and project lead of the Gradle build system and the CEO of Gradle Inc, a company that provides training, support and consulting for Gradle and all forms of enterprise software project automation in general. Hans has 13 years of experience as a software developer, team leader, architect, trainer, and technical mentor. Hans is a thought leader in the field of project automation and has successfully been in charge of numerous large-scale enterprise builds. He is also an advocate of Domain Driven Design, having taught classes and delivered presentations on this topic together with Eric Evans. In the earlier days, Hans was also a committer for the JBoss project and founded the JBoss-IDE.
Watch more videos from #BABBQ15: goo.gl/B9pttg
Subscribe to the Android Developers Channel: goo.gl/ydHEAe 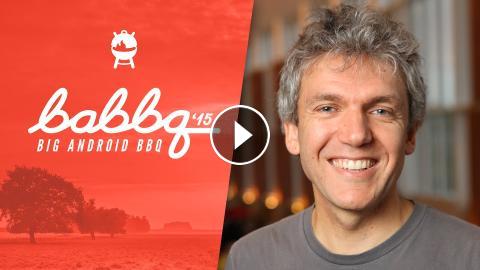 This class will provide an in-depth tour of the new Android build system, which was designed to elegantly deal with the diversity of the Android ecosy...