Everything We Know About the Cowboy Bebop Netflix Series - IGN The Fix: Entertainment

In other entertainment news, we got new looks at Party Thor, Star-Lord T'Challa and The Watcher in Marvel's What If series coming to Disney Plus! And finally, WB and DC Films are reportedly sending the superhero flick Blue Beetle straight to streaming. This news was discovered after The LA Times published a report about Warner Bros.' movie rollout plans and release strategy in light of the merger between WB and Discovery. With Blue Beetle: The Movie being listed as one of their 'mid-budget DC movies', it'll be releasing exclusively on HBO Max. We'll dive deep into all of these topics on today's IGN The Fix: Entertainment hosted by Akeem Lawanson!

Everything We Know About the Cowboy Bebop Netflix Series - IGN The Fix: Entertainment 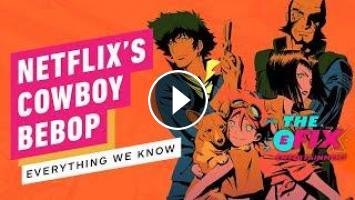 If you're jazzed for the Netflix live-action Cowboy Bebop series, here's a Cowboy Bebop Netflix update with tons of new details about the adaptation o...