The Toyota Mirai sees a complete overhaul for the 2021 model year as it enters its second generation. The most noticeable change is the complete revamp in exterior design. The 2020 Mirai looked like a close relative of the Toyota Prius, while the 2021 Mirai looks more like a Lexus. It grows in size and will be a few inches longer and wider than the Lexus GS. The styling change, however, isn’t the only revision–the Mirai also receives a more powerful fuel-cell powertrain and switches from front- to rear-wheel drive. In addition to the boost in power, the Mirai also gets an increase in range too and is now capable of driving up to 402 miles on a tank of hydrogen.

The Mirai is offered in either the base XLE trim or the loaded Limited guise, but we'd stick with the less expensive of the two. Standard interior features include heated and power-adjustable seats, keyless entry and ignition, faux-leather upholstery, and a 12.3-inch infotainment touchscreen.
The Toyota Mirai is powered by what’s called a fuel-cell electric powertrain, meaning that hydrogen (which could actually come from cow manure, among other sources) is converted into electricity by the on-board fuel cell—essentially a chemical laboratory on wheels. Fuel cells create electricity by stripping electrons from hydrogen atoms; the hydrogen then bonds to oxygen to create water, while the electrons power the electric motor. The result is an electric vehicle that is fueled with hydrogen from a pump rather than electrons drawn from the nation's electrical power grid. 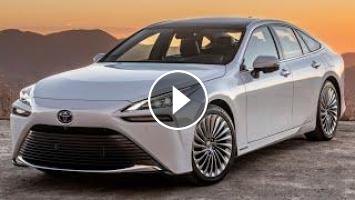