Porsche's 911 proves it's possible to have your engine in the wrong place and still compete with mid-engine sports cars. AMG does the same thing with the GT, but its front-engine layout isn't nearly as unconventional as the 911's rear-engine pendulum. With a V-8 up front and tucked behind the axle line, the GT is far less offensive to Newton's laws. While most AMG GTs cost less than $200,000 and compete with a mix of front-, rear-, and mid-engine cars, the new $400,000 Black Series version is vying for buyers in a class where a jewel-cased engine between the driver and the rear wheels is the norm.

The GT Black Series will be the top Benz in terms of performance until the much-delayed AMG One arrives. It's the brand's most powerful road car, and the Black Series branding is a sort of AMG equivalent to a 30-year-old single malt. The AMG GT R is a potent machine, but the Black Series treatment moves this GT closer to the performance level of the GT3 racer. 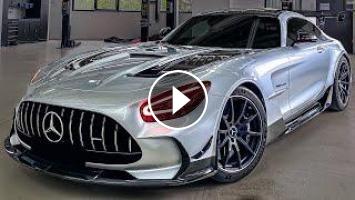 Experience The-New 2021 Mercedes-AMG GT Black Series https://youtu.be/6k1c5Np8nQ0 Porsche's 911 proves it's possible to have your engine in the wrong ...