ava
From the Bugatti Chiron to the Koenigsegg Agera RS, we bring you the world's fastest cars ever! Breaking the top speed world record! Set back, fasten your seats and enjoy this video.

World record for the BUGATTI Chiron: the 1,500 PS super car has accelerated from a standing start to 400 km/h (249 mph) and braked back to a standstill in just 42 seconds (41.96). This is the fastest time ever reached and officially measured for this driving manoeuvre for a production vehicle throughout the world. The Chiron completed the manoeuvre in a distance of only 3.112 kilometres. This underscores the supercar’s unique position in the extreme performance range. The world record was set by Juan Pablo Montoya, winner of the Formula 1 Monaco Grand Prix, two-time winner of the Indy 500 and three-time winner of the 24 hours of Daytona. The 0-400-0 manoeuvre is the first step on the way to a new world speed record for production vehicles which Bugatti intends to set in 2018 and a further highlight in the success story of the Chiron.

On February 14, 2014, the Hennessey Venom GT set a new world speed record for 2-seat sports cars by reaching a top speed of 270.49 mph (435.31 km/h). The test was performed at the John F. Kennedy Space Center on the 3.2-mile Space Shuttle landing runway. Brian Smith, Director of Miller Motorsports Park, drove the Venom GT to its record speed. A representative from Racelogic, world-renowned maker of VBox GPS data-acquisition systems, was on hand to independently verify and document the Venom GT's highest recorded speed. The Venom GT was powered with Pennzoil Platinum® with PurePlus™ Technology, a first of its kind synthetic motor oil made from natural gas.

Hennessey certainly hasn't been afraid to make (and deliver on) some bold claims around its awe-inspiring supercars, promising and then claiming an unofficial world speed record of 270.49 mph, as just one example. That trend continues as the Texan tuning house hypes up its upcoming Venom F5, with an intriguing Instagram post suggesting a 300 mph (482 km/h) top speed may be within reach.

High speed runs were conducted on a closed section of US Highway 160 near Pahrump, Nevada, on November 4th 2017. Runs were made in both directions to compensate for any variation in topography and prevailing wind.

The Agera RS achieved a new top speed record for a production vehicle, being 446.97 km/h (277.87 mph) when averaged out over both runs.

All vehicle data was recorded independently by Racelogic and the film above is taken directly from the Racelogic system, with data overlaid for video presentation. 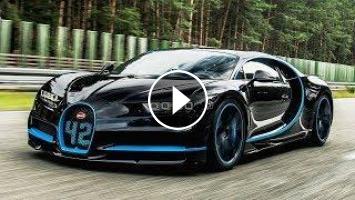 From the Bugatti Chiron to the Koenigsegg Agera RS, we bring you the world's fastest cars ever! Breaking the top speed world record! Set back, fasten ...