ava
Final Fantasy 7 Remake’s combat is surprisingly deep once you get into the nitty gritty. Techniques such as air-cancelable attacks and stance/parry cancels to speed up your animations can make this action-RPG more akin to a fighting game. Knowing the ins and outs of the capabilities of Cloud and Tifa can help you handle any fight of the game with finesse, which can be essential in some of its toughest battles.

Check out the video above as we put together some seriously ridiculous combos--these enemies get taken down in style with no hope of retaliation. If you mean to take on Final Fantasy 7 Remake in Hard Mode or to combat some of its worst enemies, such as Chadley's final summon or the Top Secret Boss Gauntlet, you're going to want to study some of these techniques. If not, allow us to show you just how powerful Cloud and Tifa can be in the right hands.

When you're done here, you might also be interested in the tons of other Final Fantasy 7 Remake videos, guides, and walkthroughs for your perusal. 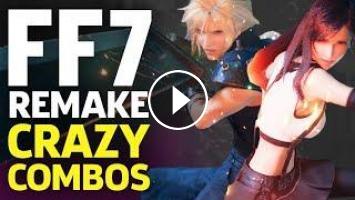 Final Fantasy 7 Remake’s combat is surprisingly deep once you get into the nitty gritty. Techniques such as air-cancelable attacks and stance/parry ca...