admin
- iPhones deals are cheaper on Swappa. iPhone X prices start at $570.
On Pocketnow Daily, the Lenovo Z5 GT Pro will be the first device with the Snapdragon 855 and will pack 12GB of RAM. iOS 12.1.2 is now available for your devices and it fixes some issues but is still violating some conditions on their Qualcomm problem. We are close to seeing Samsung's new Galaxy M line and one of the phones may pack a 5,000 mAh battery. HTC just released the Desire 12s which is a mid-ranger with average specs. We end today's show with AT&T launching their 12 city 5G Network plan on December 21.
All this and more after the break.
Stories:
- Lenovo Z5 Pro GT 855 edition outdoes the crowd with 12GB of RAM
- Qualcomm claims that Apple is still violating iPhone sales ban in China, even after releasing iOS 12.1.2
- The new Samsung Galaxy M series is almost ready to launch
- HTC Desire 12s announced as a budget smartphone with modest specs
- AT&T 5G network lighting up December 21: how much will you pay to get in?
#PocketnowDaily #LenovoZ5GTPro #iPhoneXs
Subscribe:
Follow us:
Graphics provided by: Motionvfx.com
About us:
Pocketnow has been a key source of mobile technology news and reviews since its establishment in 2000. With offices on three continents, Pocketnow offers round-the-clock coverage of the mobile technology landscape, from smartphones to tablets to wearables. We aim to be your number-one source for mobile tech news, reviews, comparisons, and commentary. If you love mobile as much as we do, be sure to subscribe!
[Video Title]
[Video URL]
Pocketnow 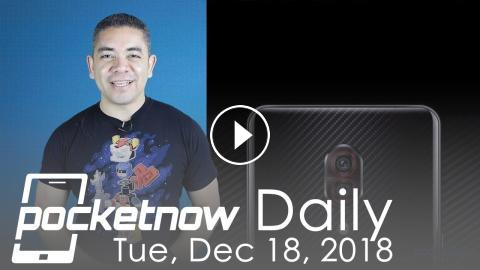 - iPhones deals are cheaper on Swappa. iPhone X prices start at $570.On Pocketnow Daily, the Lenovo Z5 GT Pro will be the first device with the Snapdr...