admin
Releasing today, the Top Gear Car Pack for Forza Motorsport 6 builds on the tradition of amazing Top Gear content in the Forza Motorsport franchise, bringing seven brand new cars exclusively to the game. As the BBC prepares the next season of the legendary television series debuting in May, we’re giving fans a taste of what to expect in the form of seven awesome new rides, all hand-picked by the editors at Top Gear.
Whether it’s a limited production car, the latest top-of-the-line series, or simply preposterous horsepower numbers, the cars of the Top Gear Car Pack all offer something special. In addition to the cars themselves, we’re also kicking off a new series of Top Gear Rivals events where players will be able to challenge one another and Top Gear editors to see who knows these cars best. For the next three months, look for new Top Gear events each month in the Community Monthly channels of Rivals in Forza Motorsport 6.
The Top Gear Car Pack is available for $7 and the cars are also available for individual purchase. 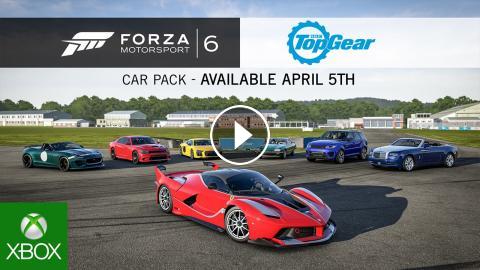