Edy
On Pocketnow Daily, we have some trade-in deals for the Nintendo Switch on Best Buy. Motorola just launched a bunch of 4K TVs in India beating OnePlus to the punch. We have some new specs on the leaks of the Microsoft Surface Pro 7 which will pack 10th Gen Intel chips. We have a new patent for a weird design that might come to the Galaxy S11. OnePlus just posted some official images of the OnePlus 7T design on a forum showing off the new design. We end today’s show with Google finally setting the launch date for the Google Pixel 4.

Stories:
- Get up to $250 in credit towards a new Nintendo Switch at GameStop right now
https://9to5toys.com/2019/09/16/nintendo-switch-trade-ins-gamestop/
- The OnePlus TV isn’t out yet, but it already has competition: the Motorola TV
https://pocketnow.com/the-oneplus-tv-isnt-out-yet-but-it-already-has-competition-the-motorola-tv
- Microsoft Surface Pro 7 specs allegedly leaked
https://pocketnow.com/microsoft-surface-pro-7-specs-allegedly-leaked
- This crazy new slider design with a waterfall display might be Samsung’s Galaxy S11
https://bgr.com/2019/09/17/galaxy-s11-leaks-samsung-slider-design-patent-details/
- Here’s the OnePlus 7T in official images and some new camera specs
https://9to5google.com/2019/09/17/oneplus-7t-design-official-images/
- Pixel 4 announcement set for October 15 at Made by Google 2019
https://9to5google.com/2019/09/16/made-by-google-2019/
- Google Pixel 4 event ad in Times Square officially shows off coral/orange color
https://9to5google.com/2019/09/17/times-square-coral-orange-pixel-4/ 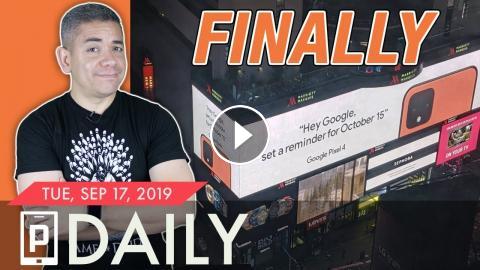 On Pocketnow Daily, we have some trade-in deals for the Nintendo Switch on Best Buy. Motorola just launched a bunch of 4K TVs in India beating OnePlus...