HOW COULD WE CREATE A SECOND EARTH?

As we blow through the resources on Earth, it’s clear we’re going to need a new planet soon. Since there isn’t just another Earth laying around, is it possible that we could make one? Many scientists are exploring whether mankind can manage the task: Taking a lifeless, desolate planet and re-engineering it and transforming it to make it beautiful and Earth-like, fit for life and humanity. This idea is called terraforming.
And we at Smart is the new sexy decided to find out what it is and how it is possible in reality, not in popular books and films. So, let’s start.
What is Terraforming?
Terraforming is the process of turning a hostile environment into one that can support human life. And the first step is to choose the appropriate planet.
Mars is considered by many scientists to be the most popular candidate for terraforming, due to its similarities to Earth and its relative proximity. After all, it is literally right there and might be a good replacement for Earth.
Many scientists believe that Mars—currently a sterile, cold, lifeless world—was once warmer, with liquid water on its surface. The fact that it may have been a friendlier environment in the past gives some hope that it could be terraformed into a “new Earth” for humanity in the future.
But, however, the challenges Mars presents are formidable! The temperatures here can drop to negative –100°F (–73°C), and the atmosphere is both poisonous to humans and remarkably thin. While water exists in a frozen form below its surface as permafrost, liquid water is rare to non-existent. So, we have to work hard in order to make it much more comfortable to live on it.

HOW COULD WE CREATE A SECOND EARTH? 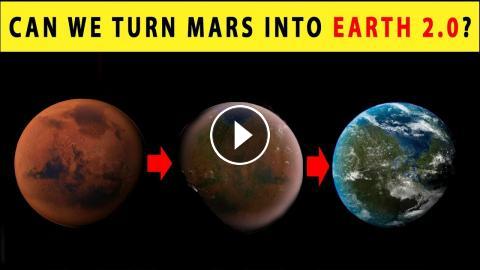 Subscribe! Because SMART IS THE NEW SEXY: https://goo.gl/JTfP6LAs we blow through the resources on Earth, it’s clear we’re going to need a new planet ...