ava
Unlocking new summons in Final Fantasy 7 Remake can be tough. While a few of the game's most powerful Materia come your way as part of the story and as you explore Midgar, most require you to test your battle skills in Chadley's VR combat simulator as part of the Battle Intel side-quest. But it's only after you finish all 19 Battle Intel assignments that you'll get access to the final summon that Chadley has to offer.

That summon, as Final Fantasy fans might have guessed, is the frighteningly lethal dragon Bahamut. Like Chadley's other summons, Shiva, Chocobo and Moogle, and Leviathan, you have to best Bahamut in battle in order to add it to your collection. Even near max level and having returned to the game after unlocking the Chapter Select menu, Bahamut is a difficult contender. He has a bunch of powerful moves that do a ton of damage, and he's an aggressive fighter who will harass you to keep you from casting spells or healing your team.

Check out the video above to see how best to take down Bahamut--we recommend going after the summon in one of the later chapters when you have a full team of three, and bringing along your strongest weapons and defensive armor to mitigate the damage you'll take. The key to beating Bahamut is staggering him, so equip Materia that helps you charge your ATB meters and use abilities that'll raise the dragon's stagger meter to take it down.

We've got a whole lot more FF7 information to help you through--check out our rundown of Final Fantasy 7 Remake tips, walkthroughs, and guides. 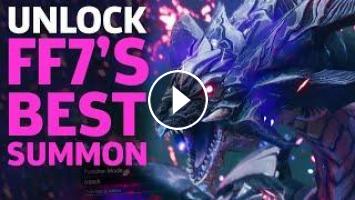 Unlocking new summons in Final Fantasy 7 Remake can be tough. While a few of the game's most powerful Materia come your way as part of the story and a...