ava
SquareSoft's Final Fantasy VII is a beloved classic, and one of the most influential JRPGs of all time. While there had been Final Fantasy games before, it was FFVII on the PS1 that truly took the world by storm, and would become one of Playstation's top selling games.

Join Brad Ellis of Easy Allies, DaveControl, Darryl of Final Fantasy Union, Lucy James and Tamoor Hussain of Giant Bomb, Maximilian Dood, Mike Brown of Resonant Arc, SquidGame, Super Eyepatch Wolf, The Completionist, The Night Sky Prince, and Trisha Hershberger as they discuss the impact FFVII has had on them and the gaming industry as a whole in this love letter to Final Fantasy VII.

Final Fantasy VII takes players on an adventure as they join the likes of Cloud, Tifa, Barret, Aerith, and more throughout Midgar and beyond. Super Eyepatch Wolf, Maximilian Dood, and The Night Sky Prince discuss their hurdle of getting over turn-based battles, while The Completionist and Trisha Hersberger talk about how incredible the initial Bombing Mission was.

SquidGame laments Aerith's downfall, while DaveControl and Final Fantasy Union joke about how it didn't impact them too much. The group discuss their favorite moments from the Gold Saucer, earning a golden chocobo, how ridiculous Nights of the Round is, and some of their favorite boss battles.

Meanwhile, they go over the incredible music written by Nobuo Uematsu, talk their favorite characters, and gush about Cloud's iconic buster sword.

Let us know what future episodes you'd like to see, and what guests you hope to see on! 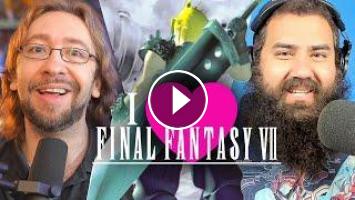 SquareSoft's Final Fantasy VII is a beloved classic, and one of the most influential JRPGs of all time. While there had been Final Fantasy games befor...