admin
The links from today’s post:
Today on In Case You Missed It: The Dubai Civil Defence treated us to an impressive -- and fantastically dramatic -- video demonstrating its ‘Dolphin’ system which consists of a jetpack connected to a Sea-Doo water craft. The jetpack uses water pressure to lift the wearer into the air to provide rescuers with better vantage points in emergency situations. The system includes a thermal camera to aid in search and rescue missions, but is largely intended for situations that occur near waterways and bridges.
Meanwhile, a Tunisian company has taken inspiration from the tiny, yet mighty, hummingbird to create a new turbine design that relies on rotating fan blades to produce up to 1kW of electricity. The “Biometric Wind Converter” design uses carbon fiber wings that flap in a figure-8 motion that imitates a hummingbird’s wing movements, and is said to be both less noisy and less dangerous to birds than conventional spinning turbines. The goal is to enable the turbine to gather energy on both the up- and down-strokes, however, it is still early in development and the technology it’s based on is still unproven.
And although it’s no longer technically a full-sized planet, Pluto still got some one-on-one attention from NASA’s New Horizons spacecraft -- after ten years and three billion miles the spacecraft sent back over a hundred high resolution images of its approach to the dwarf planet from its July 2015 fly-by. As always, please share any interesting tech or science videos you find by using the #ICYMI hashtag for @mskerryd.
Subscribe to Engadget on YouTube:
Get More Engadget:
• Like us on Facebook:
• Follow us on Twitter:
• Follow us on Instagram:
• Add us on Snapchat:
• Read more:
Engadget is the definitive guide to this connected life. 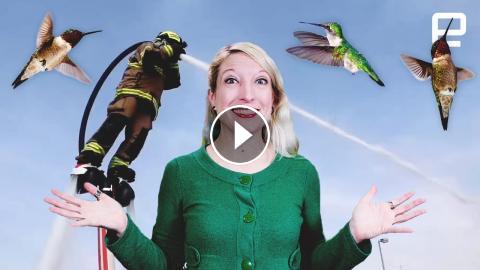 The links from today’s post:Today on In Case You Missed It: The Dubai Civil Defence treated us to an impressive -- and fantastically dramatic -- video...