iPhone 11 vs OnePlus 7T: Which is the BEST Budget Flagship?!

Edy
Even famous CEOs mocked Apple for launching the first iPhone at $500 plus a two year contract, and they had a point. It was a crazy amount of money to ask for a phone at the time. Cupertino did respond. Even with the success of the first iPhone, the next generations launched at $200 plus a two year contract, or $650 if you went unlocked, and that sort of set the pace for the industry for a bit. Then Google decided to challenge that with the Nexus 4 and 5, but it really wasn’t until OnePlus came to town that things became aggressive. Their US launches have become new fan favorites, so much so that I’d like to believe they moved the needle enough to get even Apple to wake up.

The result? This is the iPhone 11, Apple’s current best selling iPhone, and only the second time that the company iterates on a lineup with a drop in the price tag. This is the OnePlus 7T, an example of how even the new pacemaker can take a step back and nail essentials at a more affordable price. Right now the 7T is $100 less expensive than the iPhone 11, so the question is which device gives you more for your money? I’m Jaime Rivera with Pocketnow and this is iPhone 11 vs OnePlus 7T.

iPhone 11 vs OnePlus 7T: Which is the BEST Budget Flagship?! 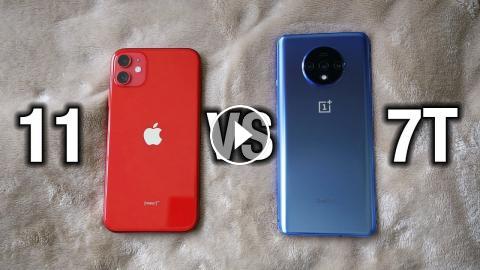 Even famous CEOs mocked Apple for launching the first iPhone at $500 plus a two year contract, and they had a point. It was a crazy amount of money to...