iPhone Is The Most Successful Product Ever

admin
Free 30 day Audible trial -
PLEASE READ THIS BEFORE COMMENTING
In regards to the concept of “most successful”… We’re not talking about best, the focus is economic success. Units sold, sale price etc. This is where the iPhone has been dominant and it’s the reason Apple has developed into the world’s most valuable company. We’re also not talking about sales from last month or last year, the title is meant to address all-time figures.
Equally important is the type of good sold. We have consumables and durable goods - . The iPhone falls into the category of durable goods. A hard good that yields utility of time, you do not eat your iPhone (or at least you shouldn’t). Examples of consumables include Coca-Cola, Kleenex, Big Mac etc. Because consumables are meant to be “consumed” one is encouraged to purchase multiples of the same product over time. Even with the more consistent consumption of popular beverages revenue figures for companies like Coca-Cola are not currently competitive with the revenue figures of Apple. This of course is a reflection of the average price per transaction.
Lastly, we have commodities (oil, coffee, copper etc.). These are not unique “products” in the same sense as a smartphone or game console from a specific manufacturer.
Here is a list of popular items from various categories.
(Source - )
Car model: VW Beetle 21.5 million
Car brand: Toyota Corolla 43 million
Music Album: Thriller 70 million
Vehicle: Honda Super Cub 87 million
Book Title: Lord of the Rings 150 million
Toy: Rubik’s Cube 350 million
Game console: Playstation 382 million
Book series: Harry Potter Series 450 million
Mobile Phone: iPhone 1 billion
There is no single version of iPhone that is the best selling of all time. The billion number listed above is a cumulative figure over the lifespan of iPhone as a product (iPhone, iPhone 3, iPhone 3GS, iPhone 4, iPhone 5, iPhone 5s, iPhone 6, iPhone 6s, iPhone 7 and so on). In fact, it’s Nokia who dominates the top of sales charts for specific models. Here’s the Wikipedia page for best selling phones ever - Even though Nokia dominated this list in volume we are once again met with lower per transaction revenue when compared to iPhone.
Android is of course very popular. The most popular Android devices being made by the likes of Samsung and their Galaxy series phones. The top selling Galaxy device of all-time is the S4 which has sold roughly 80 million units. That said, Android in and of itself is not a consumer product you purchase independently. Instead it’s bundled with hardware purchases. Android is licensed to the manufacturer. Of course if Android itself was a “product” it’s overall sales numbers would be incredible but on it’s own it does not represent a durable product as referenced above.
Of note, Apple is no longer top dog when it comes to global phone shipments currently. They did however have a huge head start which has them ahead on cumulative figures. Samsung currently owns the top spot for global shipments followed by Huawei who recently passed Apple. If the smartphone market continues in the direction it’s going (and I believe it will) Apple is unlikely to recover the unit shipment volume dominance it once had.
Lastly, I currently use a Galaxy S8 as my daily driver device. This video is not meant to prop up Apple, it’s meant to bring light to the amazing scale of the segment we’re all so intimately invested in.
See here for most valuable companies in the world -
Get The iPhone X Notch On Any Phone...
How To KILL The Samsung Bixby Button...
So You Want An S8 But You've Only Got $150...
iPhone X - Something You Should Know Before Buying
Unboxing The $5000 Massage Chair...
DON'T Buy This "Mini" Smartphone
The Most Ridiculous Purchase...
iPhone X Face ID Unlock Fail
FOLLOW ME IN THESE PLACES FOR UPDATES
Twitter -
Facebook -
Instagram -
Google Plus -

iPhone Is The Most Successful Product Ever 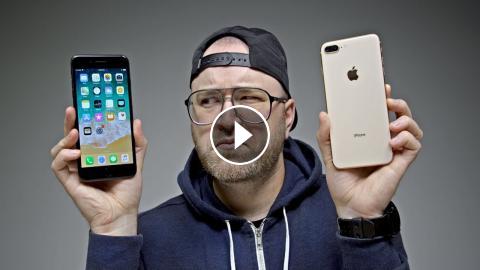 Free 30 day Audible trial - PLEASE READ THIS BEFORE COMMENTINGIn regards to the concept of “most successful”… We’re not talking about best, the focus ...