Highs Thunderously quick off the line, futuristic exterior design, equipped with cutting-edge amenities.
Lows No side-mounted airbags, only 106 will be made, not fully street legal in the U.S.
Verdict With its stylized sheetmetal, rare cabin configuration, and unforgettable performance, the McLaren Speedtail is one for the ages.

Offering breathtaking performance and sumptuous luxury, the 2020 McLaren Speedtail embodies the most rarified summit of hypercar achievement. It's priced accordingly, with a cost that starts around $2 million. With a top speed of 250 mph, this coupe holds the distinction of being the fastest McLaren ever built. The Speedtail's sheetmetal is streamlined and highly stylized, with its gaze set on the future. It's the stuff of science fiction. It boasts a hybrid powertrain that generates a staggering 1035 horsepower. If you're hoping to make one of these beauties your own, you're out of luck. Only 106 of these cars will be produced, all of which are spoken for.
What's New for 2020?

The Speedtail offers a full complement of the most modern conveniences. Forget about exterior mirrors. Instead, the Speedtail comes standard with a pair of high-definition digital cameras that discreetly glide out of the doors when you press the start button. McLaren says the cameras are more aerodynamic than exterior mirrors and provide wider sightlines. The camera feed is displayed on a pair of screens within the cabin, one on either side of the instrument panel. Inspired by the legendary McLaren F1, the driver's seat is made of carbon fiber. The cabin is draped in lightweight aniline and semi-aniline leather. These hides can be customized with unique stitching patterns in a variety of hues.

Engine, Transmission, and Performance
A twin-turbocharged 4.0-liter V-8 and an electric motor join forces here, producing a total output of 1035 horsepower and 848 lb-ft of torque. Velocity mode tailors the car's powertrain and active dynamics to help it achieve optimum speed. This mode, which comes standard, can also be used to lower the car by 1.4 inches. This hypercar's acceleration capabilities are spellbinding. According to McLaren, the Speedtail rockets from a standstill to 186 mph in just 12.8 seconds. That makes it quicker off the line than the storied McLaren P1, which made that run in 16.5 seconds.

Fuel Economy and Real-World MPG
Fuel-economy figures haven't been released for the 2020 Speedtail.

Interior, Comfort, and Cargo
Double-skinned power-operated dihedral doors grant access to the Speedtail's interior. Like the McLaren F1, this hypercar has a three-seat layout, with the driver's seat located in the center of the cockpit. The driver's seat features a special leather finish that makes it easy to slide into. This finish also works to hold you in place once the car is in motion. Instead of sun visors, a strip of electrochromatic glass at the top of the windshield blocks the sun's rays. The dashboard and passengers' seats are trimmed with leather from Scandinavia. Owners may create bespoke customization options for these hides using digital quilting or unique embossed and debossed patterns. Much of the car's controls—such as those used to start the engine and open the windows and doors—are located in panels directly above the driver's head. The car's controls and switches are crafted from polished hand-brushed aluminum. McLaren hasn't divulged the Speedtail's cargo capacity, but there is storage space available in two places: the nose and the tail. A bespoke luggage set designed to match the hypercar's interior is available.

Infotainment and Connectivity
McLaren has equipped the Speedtail with high-definition displays and touchscreens. The driver must use these interfaces to adjust most settings, as there is an almost complete absence of buttons and switches.

The 2020 McLaren Speedtail hasn't received an overall crash-test rating from the National Highway Traffic Safety Administration (NHTSA) or the Insurance Institute for Highway Safety (IIHS). Looking for driver-assistance features? The Speedtail offers nothing of the sort. McLaren's Speedtail features a three-seat layout that prohibits the inclusion of side-mounted airbags. Because of this—and because it lack traditional exterior mirrors—the Speedtail isn't technically street legal in the U.S. However, McLaren notes that the car can be driven in this country under the Show or Display law. ....
Read More https://www.caranddriver.com/mclaren/speedtail 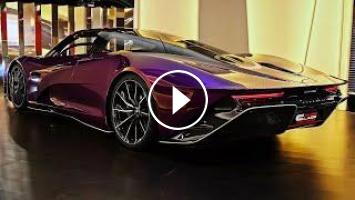