ava
Here's gameplay of the full Mortal Shell demo, including plenty of combat, shell and weapon combos, as well as a climactic boss battle.

Upcoming action-RPG Mortal Shell draws a whole lot of inspiration from From Software's Souls games--you'll find yourself in a dark fantasy world, engaging in tense, deliberate combat with enemies that can easily rip you apart if you let them. But while Mortal Shell is just as punishing as Dark Souls (and, seemingly, just as careful with its worldbuilding and stingy with its story details), it offers some new ideas to the formula From has popularized to bring some new challenges.

We played a short preview build of Mortal Sell, which gave us a sense of its Souls-like combat--check it out in the video above. You have a lot of similar abilities to Souls games, like dodge rolls and parries, as well as a devastating riposte attack that's almost exactly like Bloodborne's Visceral Attack. But Mortal Shell changes things up with two additions: the "harden" ability, which allows you to turn yourself to stone and weather an attack, either to stagger an enemy or get in close for a strike of your own; and the "shells," which are character bodies you can switch between to make use of their different strengths and weaknesses.

Our time with Mortal Shell gave us a chance to try out two different shells and two different weapons, while engaging in a bunch of combat with various enemies. The preview build culminates in a big, climactic boss fight. If you're a fan of the Souls games, Mortal Shell should scratch the same itch, while adding new ways to overcome challenges. 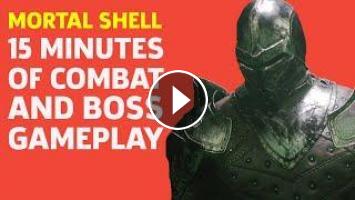 Here's gameplay of the full Mortal Shell demo, including plenty of combat, shell and weapon combos, as well as a climactic boss battle. Upcoming actio...