It’s been more than 10 years since the Peugeot 407 bowed out of the French firm’s line-up, replaced effectively by the 508. However, a ‘40’-designated model is back in the Pug fold, thanks to this: the unconventional 408.

Peugeot calls the new 408 a ‘C-segment fastback’. It’s a five-door hatchback with an almost saloon-like three-box shape, complemented by a lifted, SUV-esque stance with protective body cladding. 408 product manager Aurelie Bresson told us the brand is confident the 408 won’t rob sales from the 508, buyers of which she describes as “more traditional,” whereas the 408 customers are likely to be coming from cars like C-segment hatchbacks and C-SUVs. It’s a cousin to Citroen’s C5 X, although that car has a more estate-like shape and a bigger focus on comfort.

The 408’s aesthetic won’t appeal to everyone, but you can’t argue that it’s a striking thing to look at, with its lion-themed elements including the ‘fang’ daytime running lights, ‘cat’s claw’ rear light clusters and the ‘cat ears’ (yes, you read that right) spoiler elements.

We’re testing the 222bhp plug-in hybrid here in range-topping GT trim. It combines a 1.6-litre inline-four petrol engine with an electric motor and a 12.4kWh battery pack, giving an electric-only range of up to 39 miles. Matt Robinson delivers his verdict in this first drive review.

Would you like to receive the latest car news, reviews, features, pictures and videos in your e-mail inbox three times a week? The Auto Express e-mail newsletter delivers exactly that, it's free and it takes seconds to sign up: https://aex.ae/2ml5DOf 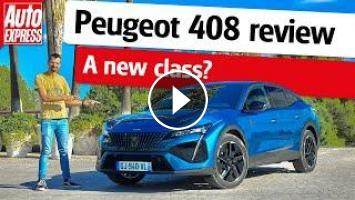