ava
Steam Deck is coming to new regions of the world and the next version of the Switch is still a ways away.
#GamingNews #SteamDeck #NintendoSwitch

Valve has partnered with Komodo for distribution of Steam in four new countries: Japan, South Korea, Hong Kong and Taiwan. These new reservations will not impact existing NA/UK/EU reservation timelines. So if you're in Q3 or Q4, you'll still be in those queue groups with the same estimated delivery dates. You can expect to see Steam Deck at BitSummit in Kyoto and September's Tokyo Game Show.

In other Steam Deck news, the latest update for the device, version 3.3, warns users about excessive heat and cold affecting the unit, which can impact performance. Officially, Valve has warned Steam Deck owners that the optimal temperature for the unit is between 0–35°C/32-95°F. Going beyond those numbers will see performance throttled, as the internal AMD APU chip runs hot to begin with.

And since we’re on the subject of handhelds with big screens, let's talk about the Switch.

Nintendo will likely not be announcing any new hardware or the long-rumored Switch Pro console this year, a new report has revealed. According to a new article by Nikkei, Nintendo is currently focused entirely on building Switch consoles with the component parts that it has been able to secure and is aiming to ship 21 million Switch units during the fiscal year that ends in March 2023. Due in part to the ongoing semiconductor shortage, Switch sales declined this year by 22.9% compared to the previous fiscal year. The system has still been a successful product for Nintendo, and lifetime sales currently sit at 111.08 million units. 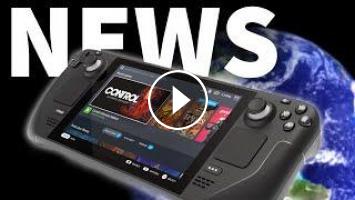 Steam Deck is coming to new regions of the world and the next version of the Switch is still a ways away. #GamingNews #SteamDeck #NintendoSwitch Valve...