ava
✅✅ Best DSLR’s Under $1250:
✅✅ Buy the Nikon D7500 on Amazon:
✅✅ Nikon D7500 with 18-140mm Lens:
Nikon D7500 Review
In this video I’m going to take a quick look at and preview the brand new D7500 from Nikon.
But anyway lets take a look at this brand new DSLR from Nikon.
Overview:
So in case you didn’t know, the Nikon D7500 will be a replacement to the very popular D7200. The naming is a little bit odd, considering most people thought the name will be a D7300, but to I think the name works well.
The D7500 is actually quite similar to the D500 so having that 500 in the name is a good idea.
4K Video
Now I extensively review the Nikon D500 last year and I was really impressed with it. One of the main new inclusins with the D500 was it’s inclusion of 4k video and I’m happy to see that the new D7500 will have it as well.
This is one area where I think that Nikon has really got the edge over Canon, as they’re willing to put 4k video in their mid to lower end DSLR’.
It’ll be interesting to see if we’re going to see any improved autofocus in video as well, as that would be a great step up.
Burst Mode
The Nikon D7500 will be shooting at 8 frames per second, which is impressive in this sub $1300 price range.
Sure it’s not as fast as something like the Nikon D500, but for most people, 8 frames per second is going to be enough unless you’re a dedicated sports or wildlife shooter.
Tilting OLED Screen
Something I’m very happy to see in the new Nikon D7500 is it’s inclusion of a tilting LCD screen. This was one of the big omissions from the D7200.
I recently reviewed the Nikon D5600 and really enjoyed it’s fully articulating screen. It’s fantastic for getting your composition right.
Not only that, the D7500 also comes with a OLED electronic viewfinder. On paper that sounds good, but it’ll be interesting to test it out in the field.
Wifi
Another inclusion to the D7500 is it’s inclusion of it’s snapbridge technolgoy. This is essentaily it’s wireless connectiviey.
To be totally honest, after using this on the D3400, D5600 and D500 i’ve not been super impressed with. It’s a bit glitchy.
There have been a few updates though recently so hopefully the D7500 comes with a more stable version.
Processor
The 7500 includes the Expeed 5 Imaging chip, which is the same processor in the D500.
That’s actually a pretty big deal and to me really shows that Nikon aren’t holding back with this camera.
We’re also getting a max ISO of 51,600, which sounds good, but we’ll see how it performs in tests later on.
Competitors
So what’s the competition for the D7500.
Well on the Nikon side there’s its bigger brother the Nikon D500, which i though was the best DSLR for last year.
I used it a lot and found it to be a brilliant camera. It is quite expensive thoguh and was out of a lot peoples price range so the D7500 will be definitely be a good option.
On the lower end you might also look at the D5600 this camera here. It’s a great camera but it does look like hte D7500’s specs are really a step above.
On teh Canon side, cameras such as the Canon 80D and 7D Mark ii will be good alternatives.
Both of those cameras lack 4k video however so that’s something to consider, although to me the dual pixel Autofocus is the best in field on those canon cameras.
So overall I’m really actually excited to test out this new Nikon D7500.
Giveaway Entry Details, Official Rules & Privacy Notice: 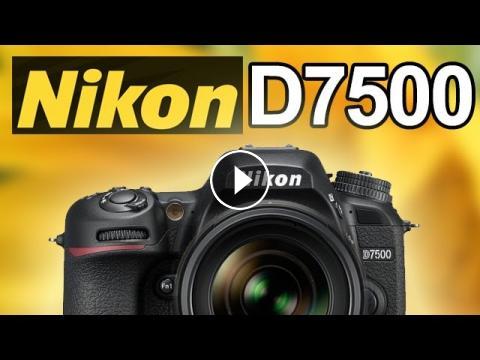